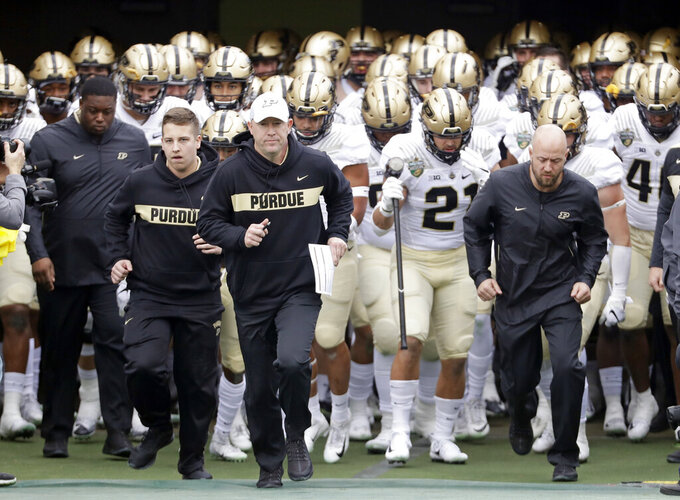 Coach Jeff Brohm acknowledges that Purdue must reduce the mistakes. He still wants the Boilermakers taking some calculated risks.

Three days after Purdue blew a double-digit, fourth quarter lead in a season-opening loss at Nevada, Brohm told reporters the biggest miscue of the game might have been the decision to play it too safe.

"Probably the fourth quarter, yes, we could be more aggressive, taken some more chances," he said Monday at his weekly news conference. "We're going to have to be firing all bullets for four quarters, taking shots, throwing the ball around the field."

Quarterback Eliah Sindelar did his part in his first start since August 2018. He went 34 of 52 with a career-best 423 yards, tied his career high with four touchdown passes and ran seven times for 26 yards.

The problem: Sindelar also threw two fourth quarter interceptions, both coming on plays Brohm described as poor decisions. Nevada capitalized on the second, picking off a deep throw on second-and-10 with under one minute to go, to set up the decisive 56-yard field goal as time expired.

And even though turnovers have been a problem for the strong-armed, fifth-year quarterback throughout his career, Brohm thought Sindelar played pretty well overall.

Clearly, Sindelar was only part of the equation.

With the running game averaging 3.3 yards per carry, Brohm thought the Boilermakers (0-1) got off-balance and relied too heavily on the passing attack. Nevada's in-game adjustments prevented All-American receiver Rondale Moore from having much of an impact, too.

Brohm criticized the defense for its inability to get stops in the fourth quarter, being undisciplined in the pass-rushing lanes and breakdowns in coverages.

He wasn't happy about the two special teams' giveaways, either, one of them the result of a fumble by Moore.

"We have to fix the mistakes we made and be men about it," Brohm said. "As coaches, from myself on down, we've got to coach better and make sure that we can get our guys to play efficient, hard-nosed football the entire game."

If Brohm learned anything from last season's 6-4 rebound from a 0-3 start, it's this: Don't panic.

Sindelar still is listed as the starting quarterback and Brohm refuses to rush back defensive tackle Lorenzo Neal, perhaps the Boilermakers' top defensive player, from a torn ACL in his knee.

In fact, there were no lineup changes when the new depth chart was released Monday. And Brohm decided to keep defensive coordinator Nick Holt in the coaches' box rather than moving him down to the field for Saturday's game against Vanderbilt.

Instead, Brohm is calling on his team to focus on corrections as they find ways to take even more chances in closing out games.

"We have to get back to working extremely hard, trying to improve on all the things we've made mistakes on," Brohm said. "If we err, we want to err on giving us a chance to win by being aggressive throwing the football."