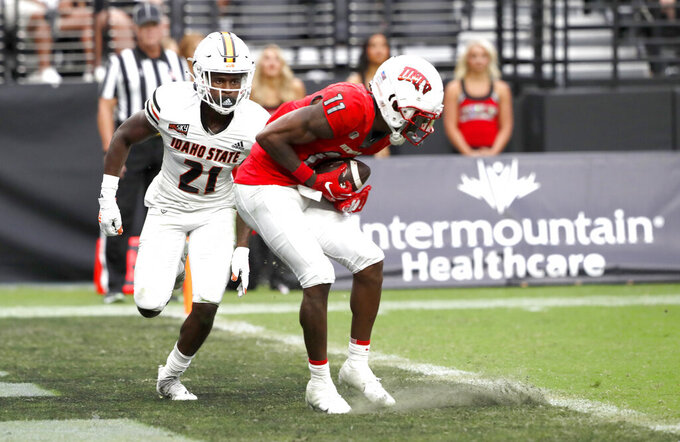 UNLV wide receiver Ricky White (11) catches a pass in the end zone ahead of Idaho State cornerback Jihad Brown (21) during the first half of an NCAA college football game at Allegiant Stadium, Saturday, Aug. 27, 2022, in Las Vegas. (Steve Marcus/Las Vegas Sun via AP)

LAS VEGAS (AP) — Doug Brumfield threw four touchdown passes, all in the first half, UNLV scored 35 points in the second quarter and the Rebels defeated Idaho State 52-21 in a season-opener on Saturday.

Ricky White scored two first-half receiving touchdowns and his 182 receiving yards in the first half were the 11th highest single-game total in UNLV history. Brumfield and White hooked up for a 72-yard UNLV score in the second quarter. The pair sat out the second half.

Among Idaho State's three touchdowns, the big play was a 55-yard pass from Tyler Vander Waal to Jalen Johnson in the first quarter.

Both teams had five sacks.

UNLV's 45 points in the first half were the second-most in program history, behind the 52 points scored against Idaho State in 2015. UNLV won that game 80-8.