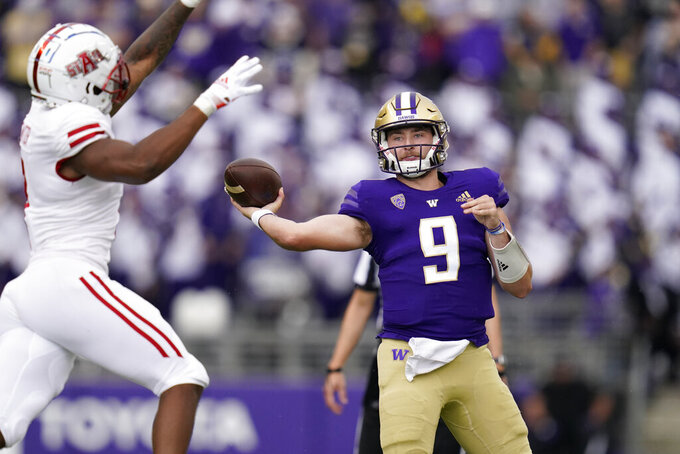 SEATTLE (AP) — California coach Justin Wilcox and Washington coach Jimmy Lake both finished off the nonconference portion of their schedules with major unknowns.

For Wilcox, it’s worries on the defensive side. For Lake, it’s concerns about the offense.

The two coaches hope to start gaining some clarity beginning Saturday night when the Golden Bears and Huskies meet in the Pac-12 Conference opener for both teams.

Both teams picked up their first wins of the season last week, with Washington (1-2) routing Arkansas State 52-3 and California (1-2) knocking off Sacramento State 42-30. They were games both teams should have and did win with ease but still didn’t resolve the issues that emerged the first two weeks.

California's defense couldn’t stop Nevada’s late rally in the opener then gave up three touchdowns of 30 yards or more and allowed 20 second-half points in a loss to TCU in Week 2. Washington’s offense, meanwhile, slogged to just seven points in the opening loss to Montana and managed a measly 10 points in the Week 2 loss at Michigan.

“We just have to execute better,” Wilcox said. “Right now we’re playing much better in the first quarter than we are the rest of the game.”

Both teams are hoping for a different experience from two years ago, the last time the schools played. A 2½-hour lightning delay during the first quarter led to a night of wondering whether the game would even be completed. The game finally resumed at 10:30 p.m. and ended at 1:22 a.m., after Greg Thomas’ 17-yard field goal with 8 seconds left gave the Bears a 20-19 win.

“Remember how awkward that was?,” Lake said. “I’ve been around it before. It’s happened a ton down in Tampa Bay. That’s the lightning capital of the world, if you didn’t know that. So, I’ve had a ton of delays before. But this one was unique because it lasted so long.”

Wilcox remembered having staffers make peanut butter and jelly sandwiches for players to snack on during the delay.

Washington and California are looking for repeat performances from their quarterbacks after last week's success.

California quarterback Chase Garbers threw for 288 yards and two touchdowns, and added another 68 yards rushing in the win over Sacramento State. He has yet to throw a touchdown in two career games against the Huskies.

Washington QB Dylan Morris seemed to snap out of a funk against Arkansas State. Morris was 23 of 39 for a career-high 367 yards and three touchdowns, and was helped by the return of wide receiver Jalen McMillan, who had 10 catches for 175 yards.

One of the big surprises from the first two weeks of the season was Washington not using veteran running back Sean McGrew. That changed against Arkansas State as McGrew was the Huskies' No. 2 option behind Richard Newton. McGrew ended up finding the end zone twice on runs of 13 and 2 yards. McGrew finished with six carries for 31 yards.

“We have a wealth of running backs that can get the job done. In this game plan, we were able to get more running backs in there, and Sean seized the opportunity and made some plays,” Lake said.

This will be the 100th meeting between Washington and California, with Washington holding a 54-41-4 advantage. California will become the fourth school Washington has faced at least 100 times, joining Oregon, Oregon State and Washington State.

California has won the past two meetings but hasn’t won three in a row against Washington since a five-game win streak from 2002-06.

Washington and California were scheduled to play in Berkeley last November to open the Pac-12's truncated 2020 season, but the game was canceled due to positive COVID-19 cases and contact tracing with the Bears.