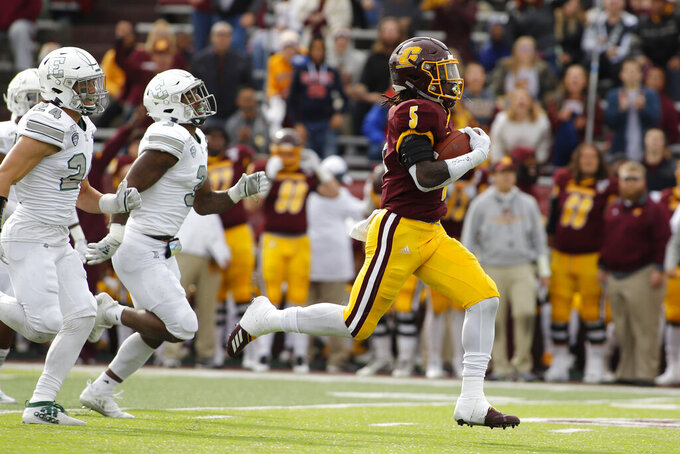 FILE - In this Oct. 5, 2019, file photo, Central Michigan's Jonathan Ward, right, breaks away from Eastern Michigan's Brody Hoying, left, and Vince Calhoun for a 64-yard touchdown on a pass reception during the second quarter of an NCAA football game in Mount Pleasant, Mich. Central Michigan and San Diego State meet Saturday, Dec. 21, 2019, in the New Mexico Bowl in Albuquerque, N.M. in a game expected to be a defensive battle. (AP Photo/Al Goldis, File) 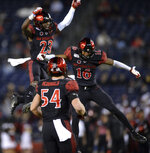 San Diego State is making a school-record 10th straight bowl appearance but hasn't won a bowl game since its 31-10 victory over Houston in the 2016 Las Vegas Bowl. The Aztecs lost to Ohio 27-0 in the Frisco Bowl last year. This season, San Diego State started with a 7-1 record then dropped two of its last three conference games to fall out of contention for a Mountain West title game berth. Meanwhile, the Chippewas under first year under coach Jim McElwain completed one of the nation's biggest turnarounds following a 1-11 season — the school's worst. Under McElwain, Central Michigan won the Mid-American Conference West and reached the title game for the first time since 2009.

San Diego State and Central Michigan both have stingy defenses and offenses that seek to control the clock. The Aztecs rank second in the nation in rushing defense (72.3) and second in rushing yards allowed per carry (2.6). Central Michigan is also known this season for its rushing defense. The Chippewas have given up 115.1 rushing yards per game — a mark ranked 20th nationwide. Central Michigan, however, has scored 415 points this season, the fifth-most in program history. The Chippewas are averaging 31.9 points a game while the Aztecs average 19 points.

San Diego State: Cornerback Luq Barcoo is tied for second in FBS with eight interceptions and is tied for first place nationally for pass breakups (16). He was a semifinalist for the Jim Thorpe Award (best defensive back). Mobile quarterback Ryan Agnew is ranked 18th in interception percentage (1.47). He is 14-4 as a starting quarterback over his career.

Central Michigan: Senior running back Jonathan Ward comes into the game with 1,082 yards and 15 touchdowns. Behind him in the Chippewas run attack is sophomore Kobe Lewis, who has 777 yards and 11 touchdowns. Senior quarterback Quinten Dormady, a graduate transfer from Tennessee, took over the starting role midseason and has completed 66.8% of his passes for 2,148 yards and 14 touchdowns.

San Diego State coach Rocky Long is returning to Albuquerque, where coached his alma mater, New Mexico, from 1998 to 2008 and led the Lobos to five bowl game appearances. ... Chippewas coach Jim McElwain is returning to the New Mexico Bowl following a 2013 appearance as Colorado State head coach where he led the Rams to a dramatic 48-45 come-from-behind victory in the final minutes. ... San Diego State's 10th straight bowl appearance is tied for the 11th-longest streak nationally. ... Central Michigan sophomore wide receiver Kalil Pimpleton, a transfer from Virginia Tech, had recorded 79 receptions and six touchdowns this season.