Defense carries Wisconsin to 27-7 triumph over No. 9 Iowa 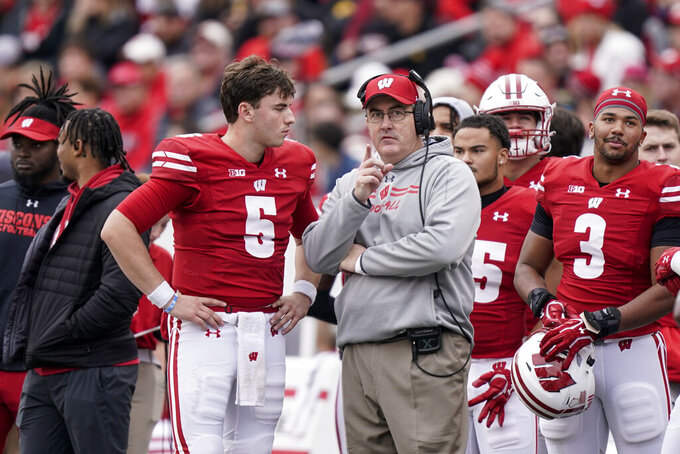 MADISON, Wis. (AP) — Wisconsin safety Collin Wilder was planning his Halloween costume this week when he bought a red and white hat for $7 at a mall and wrote a message on it with a Sharpie.

Just like that, he came up with the object that best symbolizes how the Badgers have turned their season around.

Wisconsin forced three turnovers and produced six sacks in a 27-7 victory over No. 9 Iowa on Saturday that enabled the Badgers to maintain control of their destiny in the Big Ten West Division race. Each time a Wisconsin player made a big play on defense, he wore Wilder's hat with the homemade slogan, “The Grit Factory.”

“That's the mentality of this whole program, is grit,” said Wilder, who intended to dress up as a factory worker or mechanic for Halloween. “I feel like that's what this program was built on. When you talk about the grit factory, this is the factory of grit - the University of Wisconsin.”

“A lot of people counted us out,” said Wisconsin quarterback Graham Mertz, who scored on two quarterback sneaks and threw a 4-yard touchdown pass to Jake Ferguson. “Everybody in that locker room, that never even crossed our mind.”

Wisconsin’s Braelon Allen rushed for 104 yards on 20 attempts. The 17-year-old freshman has run for over 100 yards in four straight games after totaling just 12 carries in Wisconsin’s first four games.

“There’s no panic,” Iowa quarterback Spencer Petras said. “We’ve been there before. We started last season 0-2. The biggest thing is pushing through when you get knocked down like this. There’s no quit in this team.”

Iowa had no answers for a Wisconsin defense that limited the Hawkeyes to 24 yards rushing on 30 carries.

The Badgers built a 20-0 halftime lead as Iowa fumbled three times inside its own 20-yard line in the second quarter, leading to 10 points for the Badgers. Iowa was ranked third and Wisconsin tied for 124th among all Football Bowl Subdivision teams in turnover margin before Saturday’s game.

The tone was set from the start of the game after Iowa won the toss and chose to receive the opening kickoff rather than defer.

“We saw they wanted the ball," Wisconsin linebacker Leo Chenal said. "We were like, ‘OK, we’re going to show you that's not a good decision.' ”

Iowa didn’t pick up a first down until just 1:15 remained in the second quarter. Iowa’s net yardage total didn’t get into positive territory for good until midway through the second quarter when the Hawkeyes already trailed 17-0.

Wisconsin's defense showed its tenacity all day. Linebacker Jack Sanborn exemplified that as much as anyone.

Iowa trailed 20-7 and was threatening to get back into the game in the third quarter when Sanborn returned from a cut on a finger that required stitches. He teamed up with Scott Nelson to stop Iowa fullback Monte Pottebaum for no gain on fourth-and-1 from Wisconsin's 40-yard line, foiling the Hawkeyes' second straight fullback dive attempt.

“I think it's what everyone expected,” Sanborn said. “It's Wisconsin vs. Iowa. I think everyone would have been disappointed if they didn't do a fullback dive there.”

Wisconsin's student section poured onto the field after the game while the Badgers brought out the Heartland Trophy that goes to the winner of this annual matchup. In the meantime, Wilder was left to ponder how he might alter his Halloween costume.

Wisconsin tight end Clay Cundiff was carted off the field in an ambulance with his right leg in an air cast after he got hurt in the closing seconds of the third quarter. His teammates gathered around him to offer support before the ambulance took him away.

Cundiff gave a thumbs-up to a cheering crowd as he went into the ambulance.

Iowa: The Hawkeyes simply don’t have enough firepower on offense to survive the mistakes they made in the second quarter. Iowa would have lost by an even greater margin if the Hawkeyes hadn’t played such strong red-zone defense. ... Before Saturday, Iowa had held opponents to 24 points or fewer in 29 straight games.

Wisconsin: The Badgers have beaten ranked opponents in each of their last two games, as they won 30-13 at then-No. 25 Purdue a week ago. Before this stretch, Wisconsin had lost eight straight games to Top 25 teams.

Iowa obviously will fall out of the top 10 and could plunge all the way into the 20s after a second straight loss.

Iowa: At Northwestern on Saturday.

Wisconsin: At Rutgers on Saturday.