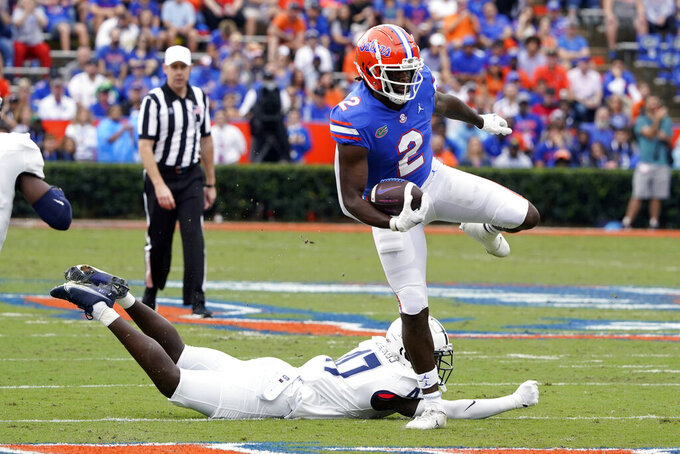 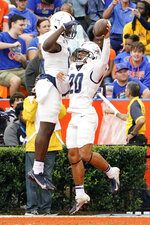 He sang with his team, posed for pictures, shook hands with fans and then made excuses for one of the worst defensive performances in school history. It was more surreal than the Gators' first-half numbers Saturday.

“Calling a win disappointing is disrespectful to the game and our players,” Mullen said.

Emory Jones accounted for 550 yards and seven touchdowns, delivering a career performance that may have — at least temporarily — saved Mullen's job.

Although the Gators (5-5) ended a three-game skid, the offensive shootout in the Swamp felt more like a loss than any outcome in Mullen’s four years in Gainesville.

Florida gave up a season-high 530 yards and its most points (42) ever in any half, and those defensive lapses came against a middle-of-the pack team from the Southern Conference and less than a week after Mullen fired two of his top assistants.

Mullen vowed to get Florida fixed following their departures that came after last week’s 40-17 drubbing at South Carolina. No one expected it to happen overnight. But the Gators lacked energy Saturday, looked lost at times and trailed by as many as 14 points in a game they were favored to win by more than five touchdowns.

“I don’t know if people were nervous or what, but slow start,” Gators linebacker Mohamoud Diabate said. ”We were able to get going at halftime, get fired up and come out and finish the game.”

Mullen pointed to penalties and missed tackles as the primary culprits for his team's defensive breakdowns. There’s little doubt that losing to Samford (4-6) would have cost Mullen his job and left the Gators on the hook for his $12 million buyout.

Now, though, Mullen’s future likely hinges on Florida’s next two outings: at Missouri and at home against rival Florida State. Win them both and he gets a chance to turn things around in Gainesville. Lose one and athletic director Scott Stricklin likely would be searching for Mullen’s replacement.

No one can look at Florida and see a program headed in the right direction. The Gators have dropped eight of their last 10 against Power Five teams and were on the ropes against a team from the Football Championship Subdivision.

Florida had won its previous four games against FCS opponents by a combined score of 199-16. The Bulldogs scored touchdowns on five of their first six drives – with little resistance — and led 42-28 late in the second quarter.

Samford’s upset bid continued into the fourth with a successful onside kick that followed another touchdown. But the Bulldogs settled for a field goal, failed to convert twice on fourth down and couldn’t stop the Gators down the stretch.

Jones completed 28 of 34 passes for 464 yards and six touchdowns. All of those passing numbers were career highs. He also ran for 86 yards and a score. His 550 yards total broke the previous school record (533) set by Tim Tebow in his final game, the 2010 Sugar Bowl against Cincinnati.

“I didn't even know that,” Jones said. “Definitely more of a confidence builder for me.”

Samford's Liam Welch complete 33 of 52 passes for 400 yards, with three TDs and an interception. He also ran for 65 yards and two scores.

Montrell Washington finished with 322 all-purpose yards for the visitors. He ran for a touchdown, caught 10 passes for 124 yards and a score, and returned a kickoff 98 yards for another.

“We came out with a little chip on our shoulder like we talked about all week,” Samford coach Chris Hatcher said. “I’m proud of our team. Getting beat is no consolation for us and we really came here expecting to win the ball game. But our guys fought.”

Samford: The Bulldogs got $525,000 to make the eight-hour bus ride to Gainesville, a decent payday that will help fund their entire athletic budget. An even better reward would have been handing Florida a stunning loss in the Swamp.

Florida: The biggest question: How long does Stricklin stick with Mullen, who led the Gators to three consecutive New Year’s Six bowls? Mullen probably deserves a chance after one subpar season. However, mounting losses and Florida’s lack of talent and recruiting prowess on both sides of the ball make it seem like his departure is inevitable.

Samford returns to conference play and ends its season against Furman next Saturday.

Florida plays at Missouri next Saturday.