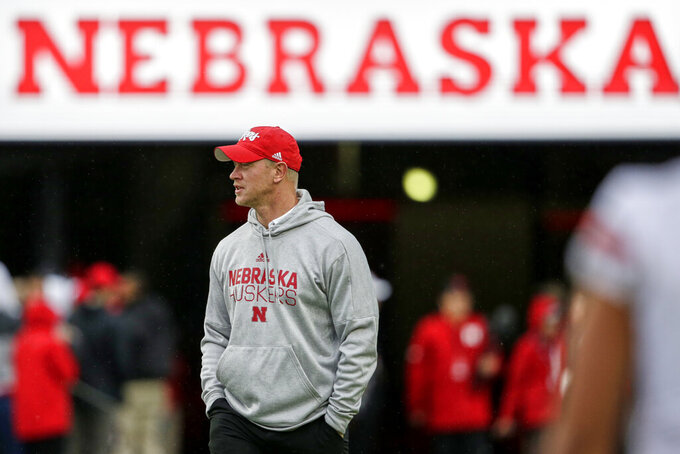 In this Sept. 28, 2019, photo, Nebraska head coach Scott Frost follows his players warming up before an NCAA college football game against Ohio State in Lincoln, Neb. The Cornhuskers have underachieved in a season in which they were a popular pick to win the Big Ten West. They are 4-4 and well behind Minnesota in the West race. Tension is palpable inside and outside the program. (AP Photo/Nati Harnik)

LINCOLN, Neb. (AP) — It wasn't supposed to be this way for Nebraska.

In Scott Frost's grand plan, the Cornhuskers would begin their climb in the Big Ten West in Year Two coaching his alma mater.

It was jarring when Nebraska lost its first six games in 2018, but wins in four of the last six created such an air of positivity that the media picked the Huskers to reach the conference championship game this year.

Here the Huskers are: 4-4 overall and 2-3 in the Big Ten after losing three of their last four. They're still mathematically in the division race, 2 ½ games behind unbeaten Minnesota, but the more realistic goal is to win two of the last four to achieve the six wins needed to go to a bowl for the first time since 2016.

Frost helped fuel the expectations, proclaiming shortly after his hiring that "people better get us now, because we're going to keep getting better and better" and the second year would be when the team would "take off." Athletic director Bill Moos, a bit tongue-in-cheek, told a luncheon crowd last year that Michigan coach Jim Harbaugh and then-Ohio State coach Urban Meyer would be "running a little bit scared" with Frost's arrival.

Fans unwaveringly loyal to the native son ate it up. Frost has capital built up from quarterbacking the 1997 Huskers to a national championship and having success at each of his coaching stops, notably the magic he worked in two years at Central Florida. He was seen as a savior, the natural choice to restore pride in one of only seven programs with 900 all-time wins.

Now, as the Huskers continue to underperform and a 20th straight year without a conference championship appears imminent, the tension is obvious.

Frost has ripped his players inside and outside the locker room. A handful of new players have called out players brought in by former coach Mike Riley and told them to get with the program. Fans and media have begun to question whether a staff Frost brought with him from the American Athletic Conference has the chops to coach winning football in the Big Ten.

At 8-12 heading into Saturday's game at Purdue, Frost's record is the worst after 20 games since Bill Jennings went 4-16 over the 1957-58 seasons. The Huskers' four wins this season have come against teams that are a combined 9-22, and only Illinois is .500.

The defense is ranked no higher than 10th in the Big Ten in any of the major categories. The offense has taken a step back, partly because of a spate of quarterback injuries but also because of a struggling line, the regression of the receiving corps and a run of fumbles.

At halftime of the 38-31 home loss to Indiana last week, a frustrated Frost told a radio reporter his team's mistakes in the first half were "dumb-ass stupid," and then he went and lit into his players in the locker room. After the game, he pounded on the theme of mediocrity or, as he said, being "just OK." He raised eyebrows when he referenced something apparently bugging him for two weeks, back when his team was rolled at Minnesota.

"I don't want guys that go out in Minnesota with hoodies on and everything for warmups," he said. "That just says to me 'just OK' is enough, 'I'm a little cold so I'm going to come out here in that.' You got ridiculed and beat up when I was playing if you did that."

Wan'Dale Robinson, arguably the best offensive player, and other freshmen have spoken up about what they see as a lackadaisical attitude by some of the older players.

"There's still some guys on the team that aren't bought all in with our mentality that coach Frost is wanting our team to have for years to come, and we have to start that now," Robinson said. "Even though I'm a freshman, I'm still trying to get into the older guys' heads."

Robinson is testing the code of the locker room by speaking up. He's willing to take that chance, acknowledging some of the things he has said and plans to say "are probably going to make some people uncomfortable."

Defensive lineman Darrion Daniels, a graduate transfer who has been on campus for six months, reached his boiling point hours before the Indiana game. The team spends Friday nights of home games at a Lincoln hotel, and in the morning the players go to a large open room to do light exercises.

"I feel like a lot of us were just going through the motions, not executing. We weren't really taking it serious. We were just filling time instead of executing it," Daniels said.

That prompted Daniels to chew out his teammates.

"I try to fix things around me," he said. "That given situation, I feel like that something out loud needed to be said. I wasn't the only one to say something. I was just the one to enforce it."

That warmup period set the tone, and Frost had seen enough by halftime.

"There comes a time and a place when you have to rip some tails, honestly," he said.

Frost met with the players Monday to explain why he was so hard on them and to reassure them he wasn't attacking them personally.

"The guys get it," he said. "Talking to the captains, they want some of that to make sure guys are conscientious to do their jobs better and more precisely. I still feel like that is what we are missing a little bit, just the guys caring enough to do their job perfect on Saturdays and practice all the time."

23 minutes ago
By Ralph D. Russo an hour ago
7 hrs ago
9 hrs ago
By John Fineran 9 hrs ago