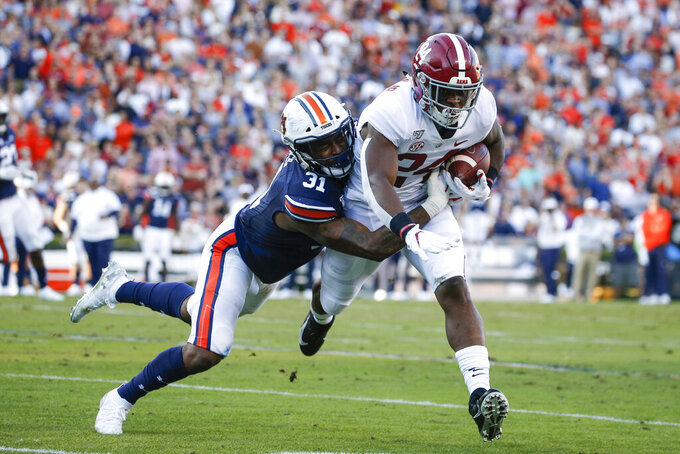 FILE - Alabama running back Brian Robinson Jr. (24) carries the ball as Auburn linebacker Chandler Wooten (31) tries to tackle him during the first half of an NCAA college football game in Auburn, Ala., in this Saturday, Nov. 30, 2019, file photo. Wooten’s experience should provide a boost for Auburn as the Tigers attempt to replace Tampa Bay Buccaneers fifth-round draft pick K.J. Britt at linebacker. Wooten had 10 tackles in 2018 and 27 more in 2019.(AP Photo/Butch Dill, File)

Bryan Harsin's first game as Auburn's coach comes against a team that just suffered through a 21-game losing streak. The next opponent is an FCS team.

Harsin should be able to ease into his Southeastern Conference tenure Saturday night against 36.5-point underdog Akron, followed by an even bigger mismatch versus Alabama State.

The former Boise State coach is more concerned about how his team handles the typical first-game mistakes and issues than his own debut.

“The excitement really is the week of prep leading into the game, and then once we get to Saturday, it’s just letting these guys kind of loose and go play,” Harsin said. "That’s the fun part.

“That’s the opportunity for all the work that our players have put in, that our coaches have put in to go out there for four hours and just cut it loose and know it’s not going to be perfect. We don’t expect that.”

Harsin, who returned to the office Monday from a bout with COVID-19, took over an Auburn team coming off a 6-5 season that culminated with the firing of Gus Malzahn. He inherits a team led by third-year starting quarterback Bo Nix.

Harsin also appears to get a relatively easy path to his first big Auburn test, Sept. 18 at No. 19 Penn State.

The Zips went 1-5 in a COVID-19-shortened 2020 season, snapping a 21-game losing streak against Bowling Green before dropping the finale. That gave coach Tom Arth his lone win in a 1-17 start.

That team didn't play in front of any fans in its last four games because of COVID-19 restrictions. Now, the Zips visit 87,451-seat Jordan-Hare Stadium, which is now reopened to full capacity.

“Going from zero to 100 pretty quickly, just playing in that type of environment, is going to be a very positive experience for our team,” Arth said.

Nix is operating under his third offensive coordinator in as many seasons, with Mike Bobo taking the reins. It will be a change-up from Malzahn's hurry-up, spread-like offense.

“I’ve got a lot of experience the past few years, I’ve seen a lot of looks, and I like how our schemes are going to fit those looks,” Nix said.

“We haven’t made that determination yet,” Arth said. “We feel that we have a number of really capable quarterbacks.”

Brandon Council was a three-year starter for Akron, starting every position on the offensive line except right guard. That's where he opened last season as a graduate transfer for the Tigers before his season ended with a knee injury. Council is vying with Alec Jackson to start at left guard.

“He’s told us all about their personnel and stuff,” Auburn center Nick Brahms said. “He’s got a little insight into that. He’s excited to do it. I know he is. We’ve talked about it, for sure. He’s looking forward to getting out there.”