'How is this guy still employed?': NCAA's Emmert a survivor 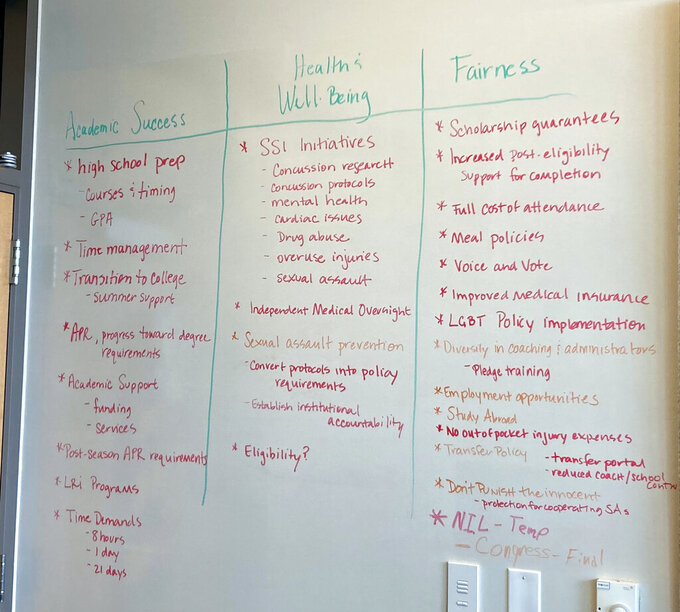 A dry erase board fills a wall in the office of NCAA President Mark Emmert, Wednesday, July 21, 2021, at NCAA headquarters in Indianapolis. Emmert is now the second-longest tenured leader in the long history of the NCAA. Over 11 years, he has guided the NCAA through a period of unprecedented change amid relentless criticism. (AP Photo/Ralph Russo)

INDIANAPOLIS (AP) — A dry erase board stuck to the wall behind the door to Mark Emmert's office at NCAA headquarters has three columns drawn on it. At the top of the list on the left, “Academic Success” is handwritten in green marker. The middle column is for “Health & Well Being.” On the right is “Fairness.”

Jotted down under each header are policy goals and initiatives the NCAA has worked to achieve during Emmert’s 11-year tenure leading the nation's largest governing body for college sports.

Ask Emmert about the NCAA's accomplishments under his watch and he will point to that wall.

“I’m incredibly proud of my work record,” he said during a recent 45-minute interview with The Associated Press.

Many are not so impressed.

While leading the NCAA through a period of unprecedented change, Emmert has faced relentless criticism. For those outside college sports skeptically peering in, he has become the easiest of targets, the face of an unpopular and seemingly ineffective bureaucracy.

“Don’t you think it is time to call your leadership of the organization into question?” Sen. Marsha Blackburn (R-Tenn.) asked Emmert during a June hearing in Washington.

Others within college sports have been asking the same question, especially in 2021. The NCAA has been hammered over gender-equity issues at its showcase basketball tournaments, saw its authority undercut by a stinging antitrust ruling from the Supreme Court and was forced into a hands off solution allowing name, image and likeness compensation for college athletes.

“How is this guy still employed?" a high-ranking college sports administrator said in a text message to AP last month, one day after Emmert publicly endorsed reducing the NCAA's role in running college sports.

That person was among about two dozen former and current college sports administrators AP interviewed for this story. Almost all declined to be interviewed on the record while a few insisted on anonymity because they did not believe being publicly critical of Emmert was helpful at a time when NCAA is getting pummeled.

If the 68-year-old Emmert is so unpopular, why is he still the NCAA president? Why did he receive a contract extension through 2025 in April in a unanimous vote by the NCAA's Board of Governors?

“We’ve been immersed in an incredibly changing and complex context for intercollegiate athletics and through this period we've recognize that we needed to both advance and modernize our framework, our rules, so that we were as attentive as possible to ensuring the best possible framework for our students who are engaged in intercollegiate athletics,” board chairman Jack DeGioia, the president of Georgetown, told the AP a few weeks before Emmert's contract extension was announced. “I think Mark has been attentive to the dimensions of this.”

DeGioia added: “We have confidence in Mark’s continuing leadership of the NCAA.”

A look at the board in his office shows Emmert has reason to feel proud about how conditions have changed for the more than 450,000 college athletes in the NCAA's three divisions during the last decade.

But the progress has been obscured. The NCAA has been hammered in court and the losses have cost the association hundreds of millions in damages and legal fees. Its grip on all things seems looser than ever — a feeling fed by Emmert himself.

Emmert started his tenure aggressively pushing for athlete benefits, but quickly learned the limits of his power when he was rebuked by membership. Early in his tenure he went outside NCAA structure and process to punish Penn State for the Jerry Sandusky scandal, an overreach that ended up hurting the association's credibility when some of the sanctions were rolled back.

The FBI's investigation of college basketball was an embarrassment to the NCAA under Emmert's watch. There are cases against schools still plodding through NCAA enforcement, which has never seemed slower — or more feckless. The sexual abuse scandal at Baylor brought only light penalties from the NCAA because its rules don't allow for more.

The so-called NIL compensation is on Emmert's whiteboard, too, in the bottom right corner, written in red. “Temp” is scribbled next to it, for temporary. Emmert has been among those celebrating the “modernization” of NCAA rules that has led to college athletes becoming paid endorsers and entrepreneurs this year.

But the changes came under pressure from state lawmakers and years after the NCAA could have gotten out in front of the issue. That left Emmert and the NCAA pleading for help from federal lawmakers that may or may not come from Congress. And with the potential for regulations that don’t stop at NIL.

Leading the NCAA at a salary approaching $3 million per year is a job that comes with far more responsibility to fix problems than actual power to implement solutions.

Those who have worked for or alongside Emmert throughout his run as NCAA president call him a “survivor" and “political animal" who relates well to the university presidents whom he answers to at the top of the NCAA's governance structure.

Emmert, after all, was president at LSU and then the University of Washington before moving to the NCAA in 2010. He has now led the association longer than anyone except Walter Byers, who became the first NCAA executive director in 1951 and held the job for more than three decades.

The job is now built for a visionary, not a dictator. Emmert sees his role as that of a facilitator, organizer and consensus-builder.

“This is not an organization where an individual or a small group of people can say, we’re going to go this way,” Emmert said.

Emmert said he is undaunted by criticism, confident in his vision and mission. While his critics complain he can be overly concerned with public perception, his willingness to be the association's heat shield helps explain his longevity.

To some, the focus on Emmert is misplaced. The problem is not the leader, but a structure that makes the NCAA — a voluntary organization with more than 1,100 member schools — so difficult to lead.

“I’m not a Mark Emmert fan, OK?” Neinas said. “But the point of the fact is: look what he’s got to work with.”

Neinas said having university presidents and chancellors at the top of the NCAA's governance chart has marginalized athletic directors and others closest to the day-to-day operations of college sports. If ADs and commissioners are unsatisfied with Emmert's leadership, that message does not seem to be getting through to the university presidents for whom they work.

Nancy Zimpher, co-chair of the Knight Commission on Intercollegiate Athletics, said the university presidents who sit on the Board of Governors and other high-rankings bodies have appeared to be content with the status quo when it comes to the role of the NCAA president.

“But I believe that as a collective, these presidents who are our leaders could absolutely ensure that the NCAA president is capable of initiating some substantive change,” said Zimpher, a chancellor emeritus of the State University of New York.

Maybe that will change as a group of college sports leaders works to rewrite the NCAA's constitution?

The Knight Commission has called for a restructuring of Division I to remove major college football. The NCAA has little to do with the management of the largest revenue-producing sport and no say at all in the College Football Playoff, which generates hundreds of millions annually from broadcast contracts for the wealthiest and most powerful conferences and schools.

Zimpher said having major college football operating under the NCAA umbrella in name only is a stumbling block to more effective oversight of the association. Why would leaders of the most powerful schools want to empower the NCAA and its leader to potentially encroach on the autonomy of their conferences and schools?

Karl Benson worked with five NCAA presidents from Byers to Emmert during his career as a conference commissioner. He said Division I has become ungovernable.

“The NCAA and Division I college sports has become a dysfunctional organization with 350 universities with a huge disparity in financial resources —- with NCAA rules trying to fit them into a one-size-fits-all system,” Benson said. “Impossible for one man to manage the system.”

Emmert has a go-to line when talking about his role in the NCAA and the extent of his power, saying people mistakenly believe his job is similar to that of NFL Commissioner Roger Goodell.

“That’s the worst metaphor you could possibly use. I’m more like the secretary-general of the United Nations. I oversee this process, I shape it," Emmert told AP.

He insists he cares about and seeks out the views and perspectives of the ADs, commissioners and other administrators who are closer to the action than school presidents.

“And I’m not surprised that people say, 'You know, why isn't this getting fixed? What’s Emmert doing?'" he said. “And people also, they want to look to somebody and say, ‘Well, fix this, damn it!’ And I get that. I understand. And I say it in the mirror sometimes. But the truth is, it’s a very complex system. I think we do need to find ways to fix that and streamline it.”

Maybe the question for Emmert about his job should be: Why does he still want it?

Emmert said he hears that a lot from his wife, DeLaine, but he simply believes there is more to be done for college athletes and he can still “add value.”

“I understand the pressures that are on schools right now, not just the athletic departments, the schools right now. It’s a tough time. It’s a very difficult time,” he said. “And I understand also the political milieu where everybody is at each other’s throats. We’re in a moment in time where you only get attention if you’re outrageous and you’re pissed off about something. And that’s become our form of discourse. I think that’s unfortunate. I think it doesn’t help us as a society. Certainly, doesn’t help us as an athletic association.”