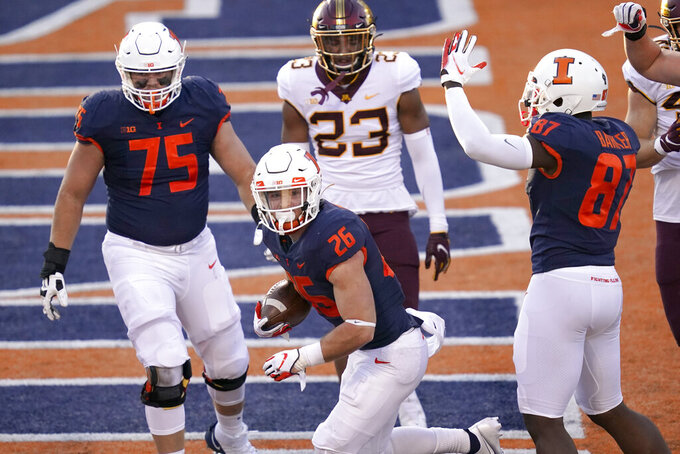 Ibrahim now has back-to-back games in which he has scored four rushing touchdowns for Minnesota (1-2, 1-2 Big Ten). It was his second consecutive 200-yard rushing game.

Morgan was 17 of 27 passing for 231 yards and a touchdown. He also threw an interception.

Illinois (0-3, 0-3) had 12 players out due to COVID-19 protocols and was down to fourth-string QB Coran Taylor. Starter Brandon Peters and backup Isaiah Washington were out, and third-string QB Matt Robinson remained unavailable after suffering a leg injury early in the Purdue game last week.

Taylor wasn’t awful, going 6 of 17 through the air for a touchdown and no interceptions. He suffered what appeared to be a hand injury on his throwing arm early in the second half but remained in the game despite obvious throwing difficulties.

“This was beyond disappointing,” said Illinois coach Lovie Smith. “It just came down to them being more physical than us on both sides of the ball.”

One bright spot for Illinois was often-injured running back Mike Epstein, who rushed for 108 yards on 11 carries with one touchdown. It was his first 100-yard rushing game since 2018 and the fourth in his career.

“It feels good,” Epstein said. “Although not much feels so good right now after this game.”

Minnesota was clicking on all cylinders most of the game. Treyson Potts scored on a 9-yard run that was set up by a 37-yard pass from Morgan to Rashod Bateman late in the first quarter. Mixing runs and passes, the Gophers methodically worked the depleted Illinois secondary.

Minnesota racked up 556 yards in total offense to Illinois’ 287.

“They dominated us on both sides of the football,” Lovie Smith said. “We had a couple of takeaways, and that was good. But not much else happened.”

Gophers defensive coordinator Joe Rossi missed the game due to COVID-19, but his defense didn’t miss a beat.

“This is going to be a process on defense,” Fleck said. “We’ve got a lot of inexperienced guys playing a ton of key positions that haven’t played a ton or haven’t played at all, and those guys are just going to have to be able to keep getting better by playing the game.”

Illinois safety Derrick Smith was ejected in the second quarter due to a targeting penalty out of bounds, further weakening an Illini secondary already without starters Nate Hobbs and Marquez Beason, both unable to play due to COVID-19 protocols.

Morgan and company took advantage. Minnesota outgained Illinois 556 to 287 yards in total offense and led 28-7 at half.

The Illini’s only score before intermission came on a 1-yard run by Epstein, which was set up by his 63-yard run to the Gophers’ 9-yard line.

Morgan and Ibrahim had their way against a depleted Illinois defense and an impotent offense led by an injured fourth-string quarterback. This game was over by the end of the first quarter.

Minnesota has an opportunity to even its Big Ten record on Friday night when it hosts Iowa, which upped its record to 1-2 after beating Michigan State 49-7 on Saturday.