Jerry Jeudy follows in steps of past Alabama star receivers 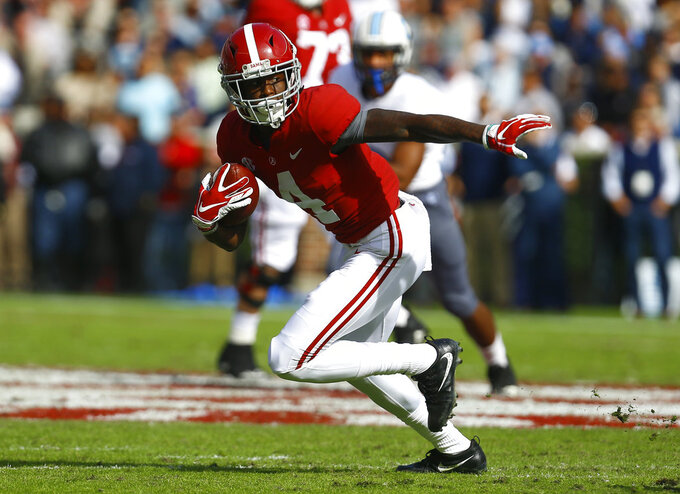 FILE - In this Nov. 17, 2018, file photo, Alabama wide receiver Jerry Jeudy (4) catches a pass against Citadel during the first half of a game in Tuscaloosa, Ala. Jeudy was named to the 2018 AP All-America NCAA college football team, Monday, Dec. 10, 2018.(AP Photo/Butch Dill, File)

TUSCALOOSA, Ala. (AP) — Jerry Jeudy's ambitions grew with every college camp he attended and every highly rated defensive back he beat head to head.

His recruiting stock rose, and so did his goals.

Now Alabama's latest All-America wide receiver, Jeudy ratcheted up his workout routine, started eating healthier and buckled down in the classroom for his senior year at Deerfield Beach High School in Florida.

"When he got out there and started feeling like, 'I'm going against guys that were supposed to be five-stars and I'm taking it to them. I can do it,'" Deerfield coach Jevon Glenn said. "Then he put himself in that class and after that, it was a wrap."

It's not a wrap quite yet, with at least one more season at Alabama awaiting, plus the College Football Playoffs. Alabama faces Oklahoma in an Orange Bowl semifinal matchup in Miami — an hour from Jeudy's hometown — on Dec. 29.

The 6-foot-1, 192-pound Jeudy has followed his fellow south Florida products Amari Cooper and Calvin Ridley to receiving stardom with the Crimson Tide. He became a five-star recruit, like them. And the go-to receiver for a national title contender, also like them.

Like Cooper in 2014, the sophomore also won the Biletnikoff Award as the nation's top receiver.

Jeudy has put up big numbers like his predecessors, including Atlanta Falcons star Julio Jones. The other three all became first-round NFL draft picks.

He has the benefit of catching passes from an elite quarterback in Heisman Trophy runner-up Tua Tagovailoa in a more pass-oriented offense. But Jeudy also shares the ball with a deeper pool of talented receivers than any of them.

Jeudy has already put up bigger numbers than Ridley did in either of his final two seasons in a much more run-first offense. He has 59 catches for 1,103 yards — an 18.7-yard average — and 12 touchdowns.

Jeudy worked out every other day with Ridley as a 10th-grader and they still keep in touch.

"Great player, works really hard and deserves everything coming his way," Ridley said. "We played high school together and grew up together a little bit. Just seeing him grow and becoming the player he is — that's the most exciting thing."

All that time working with or watching Ridley and Cooper helped give the ambitious Jeudy specific targets. Their success, he said, "just made me go harder."

"They taught me a lot," Jeudy said. "Hard work beats talent, so if you've got talent and you work hard, you can turn into something serious."

That's why his success at all-star games and camps served as such a motivator. You can be good with a good work ethic, and with a better one you could really be "something serious."

He used to hunker down in Deerfield's football lounge studying receivers like Jones, Ridley and Antonio Brown and hoping to join that elite company someday.

Glenn also offers an anecdote showing that Jeudy's increased focus transferred into the classroom, too. He said the receiver called him before the Under Armour All-American game, insisting that a B-plus he received in his final semester had to be a mistake. The teacher agreed that it was a calculating error and Jeudy wound up with straight A's, the coach said.

He said Jeudy also started hanging out more with other friends who nursed similar aspirations.

"He's got plans, he's got reservations in his mind to be one of the best when it's all said and done," Glenn said. "That explains why he works so hard and why he's so focused."

Jeudy didn't just catch the attention of college coaches — and himself — at those all-star games and camps. Current teammates saw the highlights, too, and were anticipating his arrival on campus.

"You just saw him making all these plays," Alabama tailback Damien Harris said. "We knew he was committed here, so seeing him on those videos, 'Hey, this kid is pretty good.' He came in here and continued to work hard and he's turned into the player he is now."