John Calipari: Comparing Kentucky to others was "my bad" 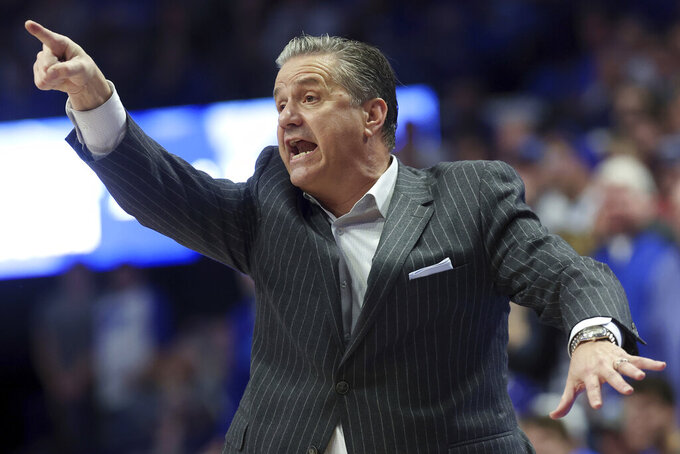 FILE - Kentucky coach John Calipari gestures during the second half of the team's NCAA college basketball game against LSU in Lexington, Ky., Feb. 23, 2022. Calipari's push for upgraded practice facilities for his Kentucky’s men’s basketball team drew a sharp jab from Wildcats football coach Mark Stoops on Twitter after Calipari referred to the university as a “basketball school” in an interview. (AP Photo/James Crisp, File)

LEXINGTON, Ky. (AP) — John Calipari says he made a mistake comparing Kentucky's athletic department to others and wants to make clear he will keep supporting the Wildcats' football team.

Calipari wrote on social media Saturday that he heard what Kentucky football coach Mark Stoops said in response to his push for upgraded practice facilities for his basketball team. Calipari says he reached out to Stoops on Thursday and will keep trying.

“Comparing our athletic dept. to others was my bad. I have supported Mark & the football team through good and bad. I will continue to support them & cheer them on,” Calipari wrote.

The Kentucky coach then added: “Now I’ll do what I’ve done for 30 years: Coach my team and block out the clutter.”

The Hall of Fame coach referred to the university as a “basketball school” in an interview and noted recently approved upgrades for other Kentucky programs. Stoops responded to the remarks on Twitter and said, “Basketball school? I thought we competed in the SEC?” He ended with the hashtag “#4straightpostseasonwins,” referencing the Wildcats’ recent success.

Calipari guided Kentucky to its eighth NCAA championship in 2012, but hasn’t reached the Final Four since 2015. The Wildcats were bounced by No. 15 seed Saint Peter’s in its NCAA Tournament opener last spring. Kentucky football is coming off its second 10-win season in four years under Stoops and has earned the four wins among six consecutive postseason appearances.