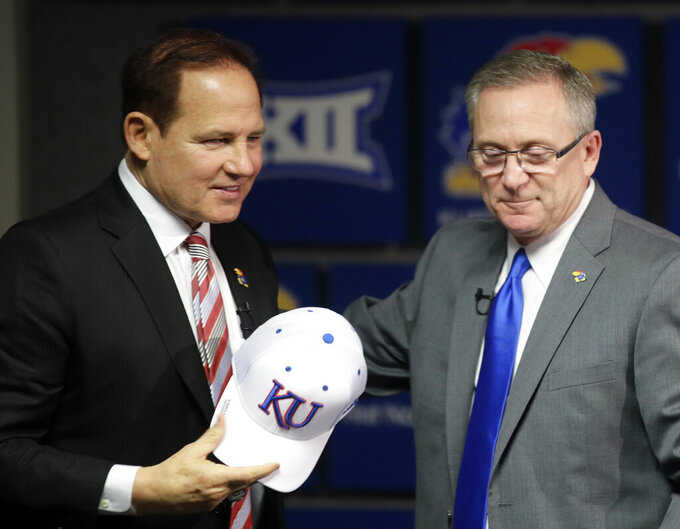 Kansas athletic director Jeff Long resigned Wednesday, less than two days after the school mutually parted with Les Miles amid sexual misconduct allegations dating to the football coach’s time at LSU and one day after Long vowed he would lead the Jayhawks' search for a replacement.

Kurt Watson will serve as the interim athletic director as the school searches for both an AD and football coach.

“We will immediately begin our search for a new athletics director. I will lead the process with the assistance of a search firm and four alumni advisors, each of whom have experience in collegiate athletics,” Kansas Chancellor Douglas Girod said in a statement. “My hope is to have a new athletics director in place within the next few weeks.”

“I understand time is of the essence and that our football student-athletes are eager to know who will be guiding them,” he said. “But we are making long-term decisions on an athletics director and a football coach, and we cannot sacrifice the quality of a search simply for expediency. While there will be a lot of speculation regarding potential candidates for both searches, I urge Jayhawks to have faith in the process and in those who are devoting their time to assist.”

Long’s dismissal came a day after he vowed to lead the search for Miles’ successor, a move that drew significant backlash from Kansas alumni. It was Long who had hired Miles, his friend of more than 30 years, despite questions that ultimately led to his firing in disgrace Monday night.

The move also comes as the Jayhawks’ storied men’s basketball program, which is awaiting the decision of an independent arbitrator on what could be severe NCAA sanctions for rules violations, prepares to open the Big 12 Tournament on Thursday with the NCAA Tournament on tap next week.

“I leave KU with a heavy heart and profound confidence that I have always acted in the best interests of Kansas Athletics,” Long said in a statement Wednesday night. “I have done everything in my control to move Kansas Athletics forward in a positive manner; that’s what makes this most difficult.”

Long was hired by Kansas to help rebuild a football program mired firmly in the Big 12 cellar. His charge was to find a coach who could take the Jayhawks back to relevance while also persuading donors to open their checkbooks in support of upgrades to the practice facility and aging Memorial Stadium.

Instead, his roughly three-year tenure was filled with bumbling missteps.

After firing former football coach David Beaty, Long informed him that it would be “for cause” due to a relatively minor NCAA investigation into a non-coaching staff member and that his $3 million buyout would be withheld. A 15 month-long court case followed, embarrassing the university that wound up paying $500,000 in legal fees before ultimately agreeing with Beaty on a $2.55 million settlement.

Long also was criticized in 2019 for bringing Snoop Dogg to Late Night in the Phog, the annual kickoff to basketball practice. The rapper’s performance included four scantily dressed dancers doing routines on stripper poles and the firing of fake $100 bills into the crowd, an apparently flippant reference to the NCAA’s investigation into allegations that Kansas basketball coaches funneled money through an Adidas rep to potential players.

“I take full responsibility for not understanding what acrobatic dancers are in today’s entertainment world,” Long said in response to the backlash, “and offer my personal apology to anyone who was offended.”

But the biggest embarrassment for Long, whose five-year deal paid him $1.5 million annually, came on the football field, where the hiring of Miles resulted in just three wins over two seasons and ended in disaster.

After firing Beaty, Long claimed to have cast a wide net in search of a replacement, even though he later admitted in a deposition that Kansas had hired a documentary film crew to shoot Miles before he had been hired.

Last week, LSU released a pair of reviews conducted by separate law firms into allegations Miles had made sexual advances toward two female members of the program while coaching the Tigers. Miles was placed on administrative leave by Kansas, and the two sides agreed to a $2 million settlement to terminate the remaining years on his contract.

Long said a series of background checks took place before the Jayhawks hired Miles in 2018, and that nobody within the LSU athletic department raised any red flags. Asked why he was unaware of the allegations against a friend of his dating to their days at Michigan in the late 1980s, Long offered little explanation.

“We ran multiple background checks,” he said. “I also asked Coach Miles directly during the interview process whether there was anything in his past that could potentially embarrass the university, himself or the program and he said, ‘No.’”

“I think much is played about our friendship,” Long added. “It’s a friendship that was certainly not the reason why we were hiring him to be the head coach. He was an established head coach, he was an incredible recruiter.”

Kansas already was planning to hire a search firm to assist in finding a football coach, but Girod made it clear that he wants the next athletic director in place before resuming the process. That means offensive coordinator Mike DeBord will continue to serve as the acting coach heading into spring practice.

“I step down knowing that I did my very best for the university,” Long said. “We made strides in academics, fundraising, facilities and diversity and inclusion, among other areas, and I truly believe the best days of Kansas athletics lie ahead.”