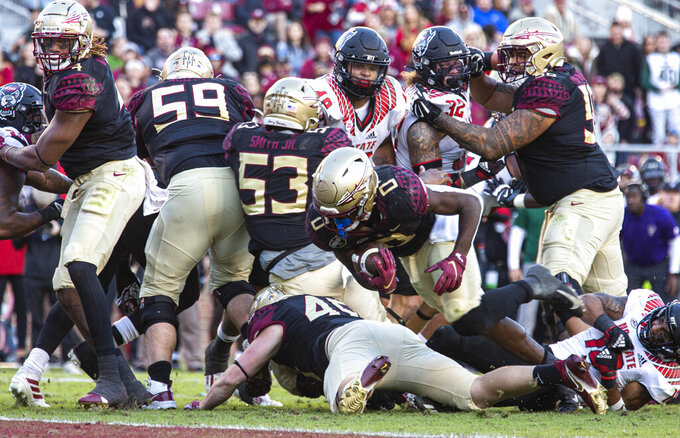 After taking a direct snap, Florida State running back Jashaun Corbin (0) dives for the end zone and scores a touchdown during the second half of the team's NCAA college football game against North Carolina State in Tallahassee, Fla., Saturday, Nov. 6, 2021. N.C. State won 28-14. (AP Photo/Mark Wallheiser)

TALLAHASSEE, Fla. (AP) — Dave Doeren can smile with pride, enjoying a season in which North Carolina State defeated Clemson and Florida State for the first time since he arrived in Raleigh, N.C., in 2013.

Devin Leary threw for 314 yards and four touchdowns as the Wolfpack jumped ahead of Florida State early for a 28-14 win on Saturday.

“I don’t know how many times NC State has beaten Clemson and Florida State in the same year as a program,” Doeren said. “But that happened this year and I think that’s pretty good. When you look at those two programs, what they spend on football, their budgets, what they spend on their staffs, what we just did. I think it says a lot about what we’re doing.”

Doeren’s Wolfpack knocked off two of their biggest Atlantic Division rivals for the first time since 2002, before some of the current freshmen were born. N.C. State used the big play in the passing game against a Florida State team that was shorthanded due to flu-like symptoms.

Leary connected with Trent Pennix, C.J. Riley, Christopher Toudle and Ricky Person on touchdowns — one in each quarter — for the Wolfpack (7-2, 4-1 Atlantic Coast Conference). Three of the touchdowns were big plays, with connections of 62 yards to Riley, 45 yards to Pennix and 43 yards to Person.

“I feel like it’s a really special day,” Pennix said. “We have a really special team. I had all the faith in my guys that we were going to pull out this win. We just went out and finished like we always do.”

McKenzie Milton filled in as Florida State’s starting quarterback with Jordan Travis not dressed out. Milton completed 22 of 44 passes for 233 yards and scrambled to complete an 8-yard touchdown pass to Keyshawn Helton, but the Seminoles (3-6, 2-4) were also plagued by drops from the start.

Leary connected with Riley and Toudle to give the Wolfpack a 14-0 lead at the half. Florida State’s offense was stuck in neutral, accumulating just 78 offensive yards and three first downs in the first 30 minutes.

Florida State was shut out in a half for the first time since the second half of a Week 3 loss at Wake Forest. It was the first time the Wolfpack held an opponent scoreless in the first half on the road since 2015 at Boston College.

The Seminoles opened the second half with an onside kick, which was recovered by kicker Parker Grothaus. That short-field opportunity eventually set up Milton’s touchdown pass to Helton, and the Seminoles added Jashaun Corbin’s 3-yard touchdown run on the following drive to cut the deficit to 21-14.

Coach Mike Norvell opted to go for it on fourth-and-4 from the Florida State 43 with 8:16 left in the game, but Milton’s pass to Ontaria Wilson was broken up.

“Liked the response that I saw from our guys,” Norvell said. “Unfortunately, we weren’t able to finish it off there in the fourth.”

Devin Leary threw a Hail Mary at the end of the first half, but the pass was intercepted by Florida State safety Jammie Robinson. Leary had not thrown an interception since a loss at Mississippi State on Sept. 11, a streak of 228 passes in which he had thrown for 20 touchdowns.

But Leary also matched a season high with four touchdowns. He also threw four TD passes against Clemson and Louisville.

NC State: While the Wolfpack struggled on the ground, Leary had his third straight 300-yard passing game and fourth of the season.

NC State: The Wolfpack play at No. 10 Wake Forest in a game that will go a long way toward deciding the Atlantic Division race.

Florida State: The Seminoles play host to Miami on Saturday seeking their first victory in the rivalry since 2016.