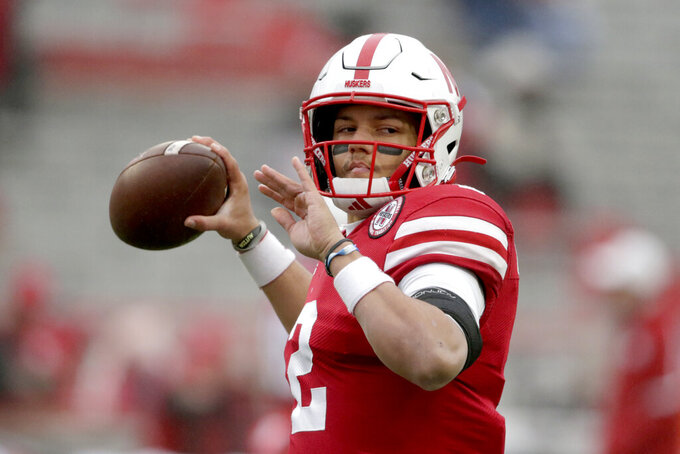 Adrian Martinez has turned back a challenge from Luke McCaffrey to win the starting quarterback's job for Nebraska's opener at No. 5 Ohio State.

McCaffrey made a serious bid to unseat the Cornhuskers' two-year starter, who struggled with injuries last year and seemed to regress from his fantastic freshman season in 2018.

As third-string QB last year, he played five-plus series in a loss to Indiana and completed 5 of 6 passes for 71 yards and a touchdown and ran 12 times for 76 yards. He also threw a 39-yard touchdown pass in a loss to Iowa.

Frost limited McCaffrey to four games so he could retain a year of eligibility.

Frost said he didn't know how much, if any, separation there is between Martinez and McCaffrey.

“I think we have two first-string quarterbacks. That's what we feel about them,” Frost said. “I really believe if Luke would have been the one who already had been playing and we were to have the same camp, it would probably be Luke.”

Martinez was the most productive freshman quarterback in the nation in 2018, averaging 371 yards of total offense against Big Ten West opponents and a school-record 295 per game overall. He led an offense that ranked second in the Big Ten and scored 30 points per game.

Martinez showed up on early Heisman Trophy candidate lists in the spring of 2019 and in the fall became the first sophomore in two decades to be voted a team captain at Nebraska.

But Martinez injured his left knee and missed games against Minnesota and Indiana. His passing accuracy slipped from 65% to 59%, and his nine interceptions were tied for second most in the Big Ten.

Martinez faced no competition for the starting job in 2019. As a freshman he had to win a battle against Tristan Gebbia, who ended up transferring to Oregon State.

“It was more similar to that first year than it was last year,” Martinez said of competing with McCaffrey, “and I think it brought the most out of myself and Luke as well as the team surrounding us.”

Martinez will try to atone for a poor start against Ohio State last year. He was intercepted on three of the Huskers’ first four series in a 48-7 loss at home.

The Huskers will be playing at a mostly empty Ohio Stadium this week because of the Big Ten policy not allowing fans to attend games during the coronavirus pandemic.

“It will be bizarre,” he said. “It will be a little bit of an adjustment at first. We'll be ready to go either way. If you need any more excitement to play in that game, in that stadium... I don't think it matters (if) the fans are there or not. Guys are going to be ready to play.”