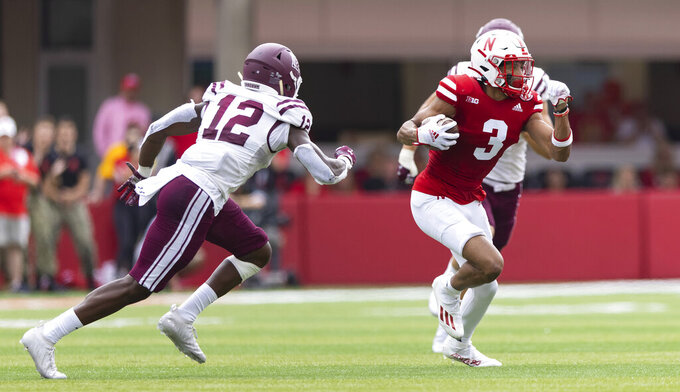 LINCOLN, Neb. (AP) — Fordham hung tough with Nebraska for a while, but ultimately the Cornhuskers imposed their will on their overmatched visitor from New York City.

Adrian Martinez ran for two touchdowns and passed for another, and the Huskers broke away in the second quarter and went on to a 52-7 victory Saturday.

“We have confidence in who we are as a team and what we’re capable of, so that means in games like this we need to come in and take care of business, and we did what we were supposed to do," Martinez said.

The win came a week after the Huskers' season-opening loss at Illinois. Did a 45-point win over a Football Championship Subdivision opponent represent progress?

Martinez established a connection with Montana transfer Samori Toure, who caught eight balls for 133 yards and ran three times for 35 yards and a touchdown. Markese Stepp added 101 yards on 18 carries as the Huskers (1-1) finished with 633 total yards.

Fordham linebacker Ryan Greenhagen finished with a Division I record-tying 30 tackles, the most since Donald Payne had the same number for Stetson against Campbell in 2014.

The Rams (0-1) gouged the Huskers for 221 yards in the first two quarters. They had 71 yards and one first down after half.

“Guys came out and they played their hearts out,” Fordham coach Joe Conlin said. “In the second half we came we came out and got the ball and we stalled out and didn't generate any first downs. It was just too much for the defense to shoulder the load and they were able to get the better of us on the ground.”

Fordham quarterback Tim DeMorat threw three interceptions in Nebraska territory, and the Huskers converted each into touchdowns. Deontai Williams had two of the picks and he also blocked a field goal.

Fordham forced punts on two of Nebraska's first three possessions and tied it 7-7 when Fotis Kokosioulis caught a pass over the middle and made a couple nice moves to finish a 31-yard touchdown.

Things started falling apart for the Rams when Nick Leinenweber attempted a tying 46-yard field goal. Williams blocked it, Leinenweber picked up the ball and dished it to lineman Anthony Diodato for a 2-yard loss.

Martinez's short run finished a 69-yard touchdown drive for a 10-point lead, and after DeMorat threw his second interception, the Huskers went 83 yards in nine plays to go up 24-7 at half.

Martinez, 17 of 23 for 254 yards, led two touchdown drives in the third quarter before Logan Smothers entered for his first college snaps.

Fordham: The Rams were on even terms with the Huskers for a while, got the experience of playing in one of the cathedrals of college football and pocketed a $500,000 guarantee.

“I think they enjoyed it," Conlin said. "I think our kids did a great job. Everyone was very nice, it’s a heck of a venue, so the atmosphere I don’t think affected us in any way, shape or form.”

Nebraska: This game against an overmatched FCS opponent does nothing to change the narrative from the loss at Illinois. The defense allowed seven plays of 15 yards or longer before clamping down after half, and Cam Taylor-Britt mishandled a punt for a second straight week.

Fordham's Greenhagen made 22 tackles in three games in the spring. He had that many by the end of the third quarter on his way to 30.

Greenhagen, the Patriot League preseason player of the year, said he's not a guy who keeps track of his statistics. He reacted to his feat with a shrug.

“The key to being a linebacker is just relentless pursuit to the football,” he said. “If you’re on the ball, you’re probably doing something right.”

The Huskers’ NCAA-record sellout streak reached 376 games, but not until donors bought more than 2,400 tickets early in the week and distributed them to disadvantaged youth.

There was a large swath of open seats at the top of the southeast stands and the upper deck on the east side had several large gaps, but most of the stadium was filled in. Attendance was announced at 85,938.

“Gosh that felt good,” said Frost, whose team had no fans in the stadium last year because of the pandemic. "We missed the fans. I know they missed being here. This was a dismal place without them, so can't wait until next week.”