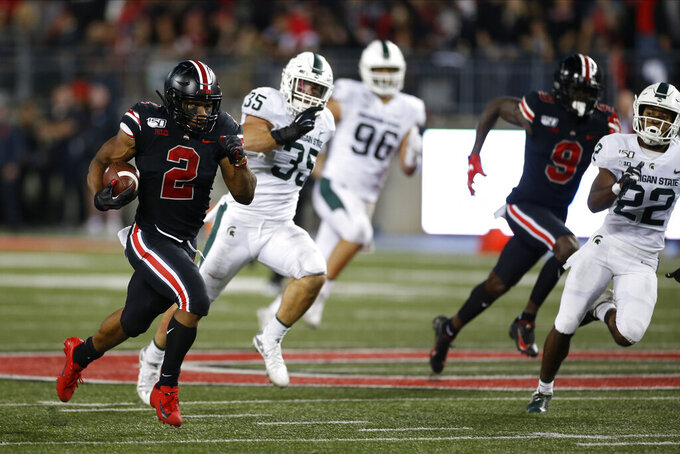 The Nittany Lions (5-0, 2-0 Big Ten) enter the meat of their schedule against a team that's given them fits recently. Iowa (4-1, 1-1) is looking to get back on track after a dismal offensive performance at Michigan. Penn State has won five straight in the series, but the last two went down to the wire. Penn State used a late interception and another stop in the final minute to hold off the Hawkeyes 30-24 in Happy Valley last October. Two years ago in Iowa City, the Hawkeyes took the lead in the final 2 minutes only to see the Lions win on Trace McSorley's touchdown pass to Juwan Johnson on the game's last play.

Taylor averages 149 yards per game for the No. 8 Badgers (5-0, 2-0) to rank second in the nation and, undoubtedly, saw J.K. Dobbins slice through the Spartans for 172 of Ohio State's 323 rushing yards. It was the most allowed by Michigan State (4-2, 2-1) since the Buckeyes ran for 335 in 2017. MSU led the conference in run defense the last two years and is surely looking for redemption. Taylor, who will be facing the Spartans for the first time, has been held under 100 yards in only five of his 32 career games.

Injuries have hit the Boilermakers (1-4, 0-2) hard, claiming starting quarterback Elijah Sindelar and star receiver/return man Rondale Moore, among others. This still is a winnable game. Jack Plummer is a capable passer if he gets protection. Penn State sacked him 10 times. The good news for Purdue is that Maryland (3-2, 1-1) isn't nearly as good on defense as Penn State. The Terrapins have 16 sacks this season, but half of them came against Howard. The Terps have won three Big Ten road games since 2015, and two were against Rutgers.

Smith ran for a career-high 211 yards against Illinois and is averaging 7.1 yards per carry the last two games. It's taken some time for the Gophers' ground game to get cranked up behind that big offensive line, and it might be needed on a cold and possibly wet night in Minneapolis. The Huskers are allowing 5.7 yards per carry the last three games.