No. 10 Trojans' talented trio of runners has more to show 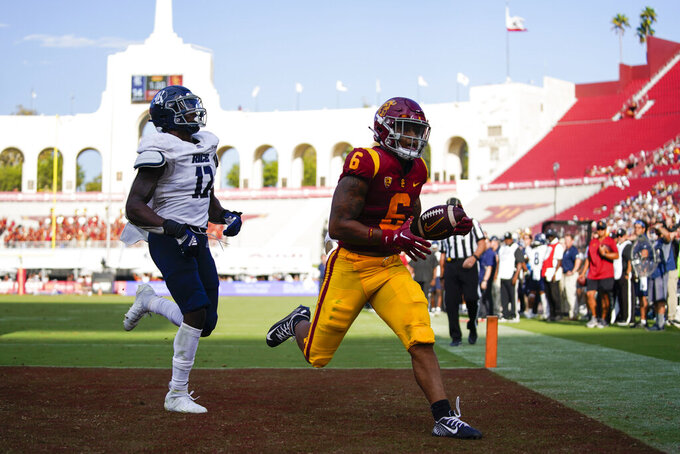 Southern California running back Austin Jones (6) runs to the end zone for a touchdown during the second half of an NCAA college football game against Rice in Los Angeles, Saturday, Sept. 3, 2022. (AP Photo/Ashley Landis)

LOS ANGELES (AP) — No. 10 Southern California has a three-headed monster at running back that showed its face in the season opener.

Former Stanford rusher Austin Jones had two touchdown scampers, ex-Oregon tailback Travis Dye thrived at pass protection and freshman Raleek Brown showed off his athleticism. Together, they combined for 186 yards and three touchdowns on 15 carries and six receptions in their debut.

“We all have our part to do in this offense, and it speaks volumes on the coaches on actually put into places where the pieces fit,” Dye said. “For one game, it just worked perfectly. We were meshing really well.”

USC coach Lincoln Riley acknowledged the trio's workload was deflated by three interceptions that were returned for touchdowns by USC (1-0) in its 66-14 win over Rice.

More touches are likely to come at Stanford (1-0) on Saturday, a Pac-12 opener.

While Jones downplayed the significance of facing a team that he spent three seasons with before transferring, Dye said Tuesday he can already sense a different level of intensity from the senior.

“Oh, he’s definitely antsy this week,” Dye said. “Definitely antsy and he wants to get after it, and I can’t wait to watch him play against his own guys."

After facing stacked boxes in Stanford’s power run game, Jones showed he could make the most of the space created by Riley’s spread offense on a 28-yard touchdown run. He finished with 48 yards on four carries and had one catch for 21 yards.

“It was definitely a lot more daylight,” Jones said.

Dye was held out of the end zone but more than made up for it with two punishing hits as a blocker. He put a defensive end on roller skates to allow Caleb Williams to step up in the pocket and complete a 29-yard pass on third down, and Dye followed it up by leveling that same defender on a chip block as he went out on his route.

“He’s showing all these ribs, you know, and I had to get me some baby back ribs real quick,” Dye said. “Slap some barbecue sauce on that real quick, but, yeah, just all my might right into his side.”

Dye, who had 21 yards receiving and 20 yards rushing, credits his growth in pass protection to working with assistant coach Kiel McDonald.

“You got to protect our team if you want to stay on the field, and that’s just what the job is," Dye said.

The most exhilarating showing came from Brown, who pulled away from a defender for his first collegiate touchdown in addition to a slippery 40-yard catch-and-run.

Brown practiced Tuesday with his ankle wrapped, but Riley does not believe the injury will keep Brown from playing.

Riley first took note of the 5-foot-8, 185-pound dynamo at a summer camp when he was coaching at Oklahoma. Jalen Hurts was the Sooners quarterback at the time, and he and Riley had the same reaction watching Brown.

“Jalen was hoping we could sign him then, and Jalen was disappointed when I told him he was a freshman in high school, and to this day Jalen still asks me about him. So, yeah, we got a pretty early introduction, and he just put on a show,” Riley said. “You could tell, athletically, he was a little bit different.”