No. 12 Texas A&M confident heading into matchup vs 1 Clemson 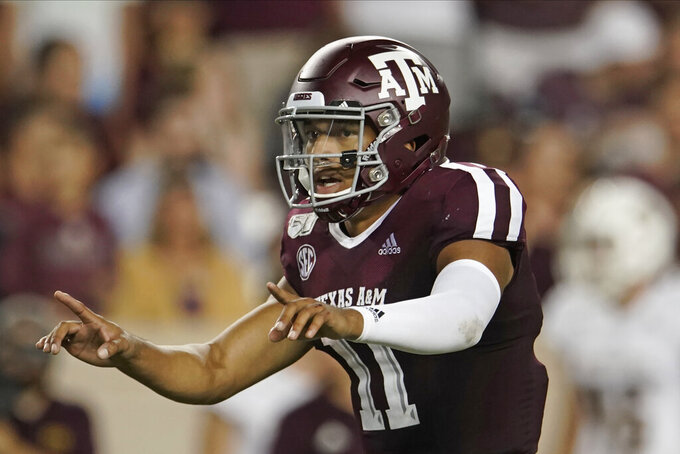 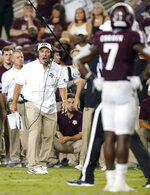 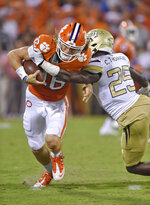 The Aggies rallied from a 14-point deficit last season vs the Tigers in the final quarter and came within a two-point conversion from sending the game into overtime before losing 28-26. The defeat fueled No. 1 Clemson's run to the national championship.

It also left Texas A&M angry and hungry for another chance.

"We have all the motivation we need from last year," Texas A&M tailback Jashaun Corbin said. "We felt like we let it slip."

Clemson (1-0) took its escape and flew off to a national title. The Tigers carry a 16-game win streak into Saturday's contest, one shy of the school's all-time mark set in the 2014 and 2015 seasons.

They looked as strong as ever in a 52-14 opening victory against Georgia Tech, Clemson tailback Travis Etienne rushing for a career high 205 yards with touchdown runs of 90, 48 and 14 yards.

No matter to the Aggies (1-0), who sound confident that this year will be different.

Offensive lineman Jared Hocker said there "would be an upset" this weekend.

Receiver Kendrick Rogers said he and some Texas A&M teammates created a group chat after Clemson won the title about how close they came to toppling the Tigers.

"We had a little doubt this year, but this year we have no doubt," he said.

Clemson coach Dabo Swinney likes the makeup of his team, but understands they have to prove themselves on the field. The defense lost seven starters from a year ago and A&M with quarterback Kellen Mond will severely test the new group.

"This is one of best teams in the country," Swinney said of the Aggies. "They have us ranked No. 1, but I don't know if we've earned that. We don't know what we are."

Some other hings to watch when No. 1 Clemson plays No. 12 Texas A&M

Clemson starting receiver Amari Rodgers has a chance to return to the lineup, less than six months after an operation to repair a torn ACL. Tigers coach Dabo Swinney said Rodgers progress has been way ahead of schedule and he could see the field against Texas A&M. Rodgers is a junior who caught 55 passes last year, second on the team. He hurt himself during spring drills and needed surgery and it seemed like he'd miss most or all of the season. But Rodgers was out warming up with teammates before Clemson's 52-14 win over Georgia Tech on Aug. 29.

Texas A&M's secondary was considered a weak spot last season when the group finished the season with just seven interceptions. But they were feeling confident after grabbing four in the opener against Texas State. Despite their success, the Aggies know things will be much more difficult this week.

"They've got some great receivers," coach Jimbo Fisher said . "And I'm glad our guys got some confidence going in. But we're going to have to play one heck of a game."

Clemson split time at its practice facility this week, allowing displaced Coastal Carolina to use its campus to work out as it prepares to face Kansas on Saturday. Coastal relocated to Greenville, about 40 minutes from Clemson, when its campus was close due to Hurricane Dorian. The Chanticleers are from Conway, about 10 miles west of the state's Grand Strand beach region.

Clemson has done this in the past, letting Citadel use its indoor practice facility in 2017 as Hurricane Irma threated South Carolina's coach.

While Mond was the star of Texas A&M's opener when he threw for three touchdowns and ran for another in just three quarters, the Aggies running game also got off to a good start. Jashaun Corbin made his first start since taking over for Trayveon Williams who left for NFL and had 103 yards rushing with a touchdown reception and a scoring run. The Aggies also got a big game from freshman Isaiah Spiller, who ran for 106 yards to become the fourth freshman in A&M history to run for 100 yards or more in their debut.

Swinney's expecting hot, humid conditions at Clemson for the afternoon contest, something he knows both team are accustomed to. "It's helpful, as opposed to being in Maine. I assume it's cool in Maine. I don't know, I've never been to Maine," he said.

For the record, the forecast for Portland, Maine on Saturday is a high of 63 degrees.