No. 14 BYU hopes to avoid letdown versus Georgia Southern 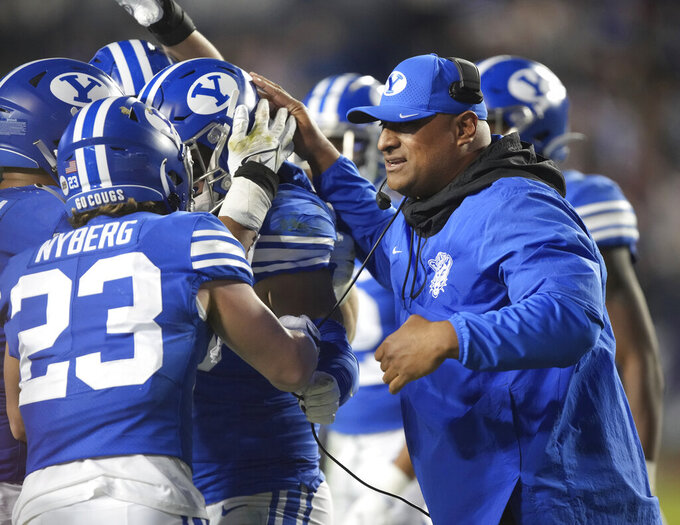 BYU head coach Kalani Sitake celebrates a turnover with his players during the second half of an NCAA college football game against Virginia Saturday, Oct. 30, 2021, in Provo, Utah. (AP Photo/George Frey)

Line: BYU by 19 ½, according to FanDuel Sportsbook.

The Cougars were off last week and have won three straight. BYU is 16-4 under coach Kalani Sitake when playing as a ranked team. The Eagles have faced two ranked teams already this season, losing to No. 20 Arkansas and No. 21 Coastal Carolina. The Cougars are the highest-ranked FBS team to visit Allen Paulson Stadium, surpassing CCU from two weeks ago.

BYU: RB Tyler Allgeier ranks No. 7 nationally with 1,162 yards rushing and is tied for the national lead with 17 touchdowns. Dating to Furman in 2013, Georgia Southern has lost its last 28 games when being outrushed.

Georgia Southern: RB Logan Wright leads the Eagles with 716 yards rushing, 5.9 per attempt and has broken off 13 runs of 25 or more yards.

BYU ranks No. 15 in the nation with 12 interceptions this season. After Malik Moore’s three picks, Payton WiIgar has added two interceptions, including one against Virginia. Drew Jensen had his first pick of the year and second of his career vs. Virginia. ... After giving up 23 passing touchdowns in the first seven games of the season, the Eagles’ defense has allowed just one over the past three games. ... Georgia Southern has played eight previous game against ranked opponents as a member of the FBS, winning against Appalachian State in 2018 and 2019. ... The Eagles have five players who have started at least 14 games in a row: offensive guard Aaron Dowdell (23), center Logan Langemeier (23), safety Anthony Wilson (21), defensive end Justin Ellis (14) and outside linebacker Benz Josue (14).