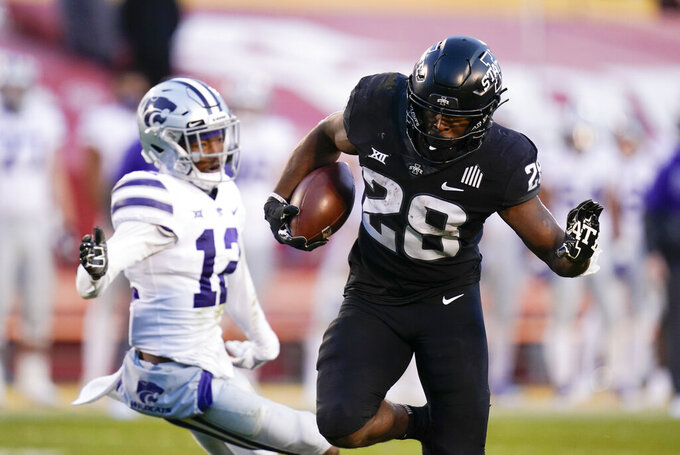 Iowa State running back Breece Hall (28) scores on a 21-yard touchdown run ahead of Kansas State defensive back AJ Parker (12) during the first half of an NCAA college football game, Saturday, Nov. 21, 2020, in Ames, Iowa. (AP Photo/Charlie Neibergall)

Some things to watch in the Big 12 Conference, which is down to four games this weekend after No. 14 Oklahoma's game at West Virginia was postponed because of positive COVID tests and contact tracing for the Sooners:

No. 15 Iowa State at No. 20 Texas in a matchup of teams trying to get into the Big 12 title game. Both have won their last three games. With a win Friday, the Cyclones (6-2, 6-1 Big 12) can plan their trip to the championship game in Arlington, Texas on Dec. 19. Iowa State hasn't won or shared a conference title since 1912. The Longhorns (5-2, 4-2), who lost to Oklahoma in the title game two seasons ago, are coming off an unexpected open date when their game at Kansas was pushed back to Dec. 12. Iowa State has already matched the school record for conference wins in a season.

Big 12 rushing leader Breece Hall vs. the Texas defense. The Iowa State sophomore is only the fourth FBS player since 1996 who has rushed for at least 100 yards and run for a touchdown in each of the first eight games of a season. The last was TCU's LaDainian Tomlinson in 2000. Hall is averaging 146.1 yards rushing a game. The Longhorns have allowed only 237 yards rushing and one TD on the ground their last three games.

Three Big 12 games are now scheduled Dec. 12 — Oklahoma State at Baylor (from Oct. 17); Texas at Kansas (from last Saturday); and Oklahoma at West Virginia (from Saturday). ... TCU DE Khari Coleman's 9 1/2 tackles for the loss are the most nationally for a freshman, and ranks second overall in the Big 12. ... Kansas CB Karon Prunty is second in the Big 12 with nine pass breakups, which ranks as the most nationally for a freshman.

TCU is a more than three-TD favorite at Kansas on Saturday. While the Horned Frogs are 8-1 in the series since becoming Big 12 rivals, they lost 27-26 in their last trip to Manhattan two years ago, after winning by a point there in 2015 and by four in 2014. The Jayhawks (0-7, 0-6) are being outscored by 33 points and outgained by 204 yards per game this season.

Oklahoma State senior WR Tylan Wallace, who plays his final home game Saturday, has 18 catches for 208 yards and a touchdown in his two previous games against Texas Tech. Wallace is the Big 12 leader with 5.6 receptions per game, and his 93.7 yards receiving per game are 25 yards more than the next-closest receiver.