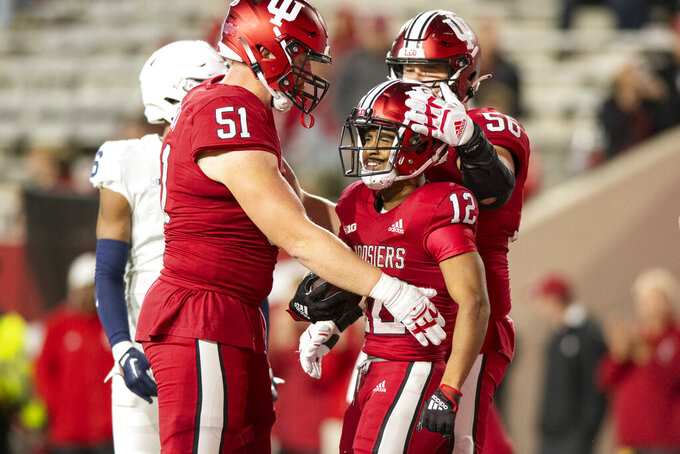 Indiana running back Jaylin Lucas (12) reacts after scoring a touchdown during the second half of an NCAA college football game against Penn State, Saturday, Nov. 5, 2022, in Bloomington, Ind. (AP Photo/Doug McSchooler)

After struggling to win at Northwestern last week, Ohio State has some issues to work out. The Buckeyes' passing game was grounded in high winds as they gutted out a 21-7 win. They also had trouble running the ball for the third straight week. They look to be sharper against the Hoosiers, who are coming off a 45-14 loss to Penn State and have dropped six straight.

Ohio State QB C.J. Stroud vs. Indiana defense. High winds limited Stroud to a career-low 76 yards on 10-of-26 passing against Northwestern, but he had a critical 44-yard scramble to set up the Buckeyes' final touchdown. Indiana's defense is struggling all around. The unit allowed 483 yards to Penn State, including 304 through the air.

Indiana: QB Connor Bazelak returns as starter after missing last week's game with an undisclosed injury. Bazelak averages a Big Ten-high 47 pass attempts per game and is completing a conference-low 54.9%.

Ohio State: LB Tommy Eichenberg is on a roll, following a 15-tackle game against Penn State with 13 more against Northwestern. He leads the Big Ten with 53 solo tackles, including 10 last week.