No. 20 Notre Dame must avoid letdown against Navy 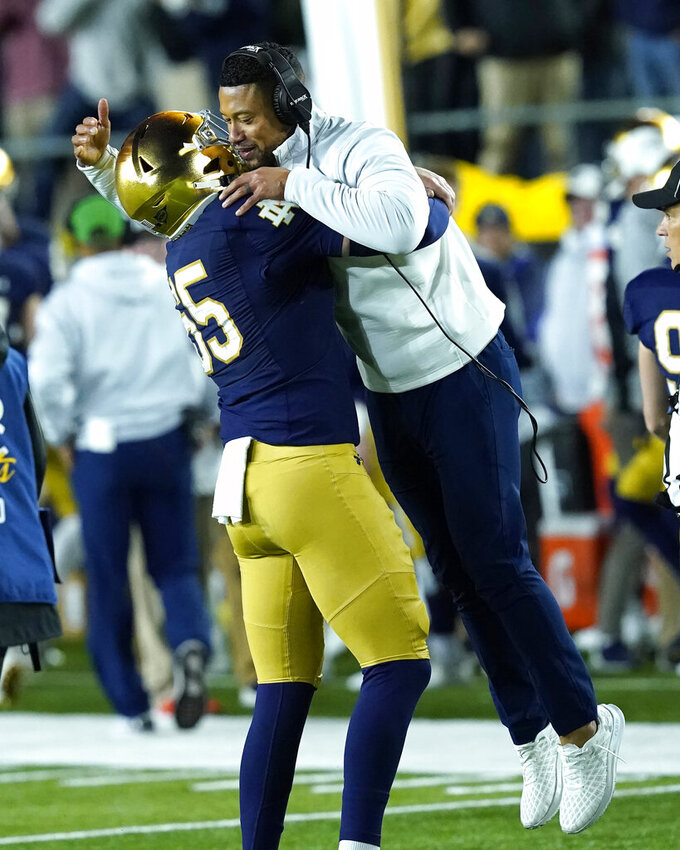 Nobody has to tell Marcus Freeman that every game on the schedule merits attention.

Even though Notre Dame has won six of seven and is coming off a stirring victory over Clemson, the Irish can't afford to overlook anyone.

“We have to turn the page and get ready for a Navy opponent that’s tough and that is a unique style of offense that will present some issues if you’re not ready to go," Freeman said.

Freeman's first full season as Notre Dame's coach has been a topsy-turvy one. The Irish have wins over North Carolina, BYU, Syracuse and Clemson, the last of which vaulted them to No. 20 in both the AP poll and the playoff rankings. They'd be even higher, of course, if they hadn't lost to the likes of Marshall and Stanford.

So the challenge this week is for Notre Dame (6-3) to show it can avoid a letdown when it takes on Navy (3-6) in Baltimore on Saturday.

“I knew at some point this would be brought up, and it’s great," Freeman said. "There’s still going to be that perception of, ‘Hey, you play to your opponent.’ There’s a belief that we play to a standard — we have to do it. I can say that all the time. Until we do that, there’s not going to be conviction in it. We have to play to our standard.”

Navy coach Ken Niumatalolo sounds more concerned with how Notre Dame has looked recently than how inconsistent the Irish have been.

“They're playing really well right now. What they did to Clemson — No. 4 team in the country, and got after them — super impressive," Niumatalolo said. "Obviously they have a tough schedule every year, but you can see them catching their stride.”

Notre Dame leads Navy 80-13-1 in a series that was uninterrupted from 1927-2019 before the coronavirus pandemic.

“You’ve got two schools that got great respect for each other. There’s obviously a lot of history," Niumatalolo said. "Forget the football part, just the history of the schools.”

Notre Dame beat Navy 43 times in a row until the Midshipmen won in 2007. Navy has won four of the past 14 meetings but none of the last four.

The loss to Stanford is Notre Dame's only defeat in its past seven games. The Irish started 0-2, including that home loss to Marshall.

“I think you see a trust and belief in what we're doing, and what's going to give us a chance at this current moment to have success," Freeman said.

This will be the 23rd Notre Dame-Navy game played in Baltimore. The Irish are 18-4 in those and haven't dropped one since losing at Memorial Stadium in 1956.

The teams generally alternate between playing at Notre Dame and playing at a third-party venue. Baltimore is in Navy's home state, but games in this series have also been played in Cleveland, Philadelphia, East Rutherford, New Jersey, and Dublin, Ireland, among other places.

The Edgar "Rip" Miller Trophy honors this series. Instead of handing it back and forth, each school owns its half of the symmetrically designed trophy. Rip Miller was an offensive lineman at Notre Dame and later coached at Navy. He was also Navy's athletic director from 1948-74.