No. 22 Ole Miss turns to Altmyer against Central Arkansas 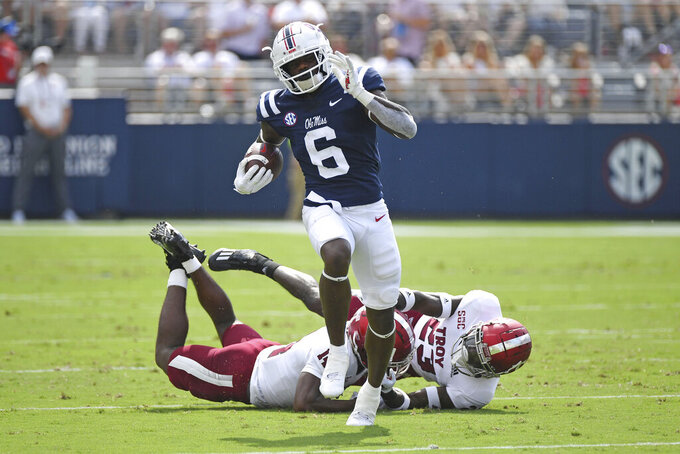 It’s Luke Altmyer’s turn to start for Mississippi at quarterback.

And coach Lane Kiffin is about ready to have this matter settled. Altmyer is set to make his first start Saturday night for the 22nd-ranked Rebels (1-0) against FCS foe Central Arkansas (0-1) after USC transfer Jaxson Dart went most of the way in the opener.

Perhaps the two games will be enough to sort out once and for all who’s the starter.

“We’d always like to have it figured out,” Kiffin said. “This is not ideal.

“Luke will go first in this game, so that gives both guys an opportunity to go first. We’ll see how he plays.”

Altmyer didn’t get many passing chances in the opening win over Troy. He was 1 of 2 for 13 yards after playing in five games as a freshman behind Matt Corral. Dart went 18 of 27 for 154 yards with a touchdown and an interception in his Ole Miss debut.

The Rebels are trying not to look ahead to their first road game, at Georgia Tech.

“That's how we're going to be able to play great and not play down to our opponent.”

Ole Miss tailback Zach Evans, a transfer from TCU, ran for 130 yards on 20 carries in his Oxford debut. Central Arkansas counters with its own standout runner. Darius Hale had 99 yards in the opening loss to Missouri State.

Hale ran for 1,015 yards and 17 touchdowns last season and was runner-up for the Jerry Rice Award given to the top freshman in FCS.

Like Ole Miss potentially down the line, Central Arkansas has turned to a transfer quarterback. Former Northern Iowa player Will McElvain started in the opener. He completed 18 of 31 passes for 173 yards with a touchdown but was intercepted twice.

Ole Miss linebacker Khari Coleman became only the third Rebels player with five tackles for loss in a game since 1999 against Troy. David Walker had four TFLs for Central Arkansas in the opening game. Both players had a pair of sacks.

At Ole Miss, Mark Robinson (2021) and Kendrick Clancy (1999) had been the last players with five stops behind the line in a game.

Kiffin had high praise for his linebackers after the opener, starting of course with Coleman. Another transfer, former Central Michigan standout Troy Brown, had 11 tackles and a quarterback hurry. Austin Keys made four tackles in his second career start.

“They did really well,” Kiffin said. “It would probably be the equivalent of if we were sitting here and the quarterback was 80% completion between the two of them, four touchdowns, no picks or something like that.”

Central Arkansas actually led 20-14 at the half in the only other meeting between these two teams a decade ago. Ole Miss wound up winning 49-27, though the victory was vacated because of NCAA violations.

Central Arkansas is 0-3 against current Southeastern Conference teams, but two of them were losses to Arkansas in the 1920s.