No. 4 Georgia closes out home schedule vs No. 24 Texas A&M 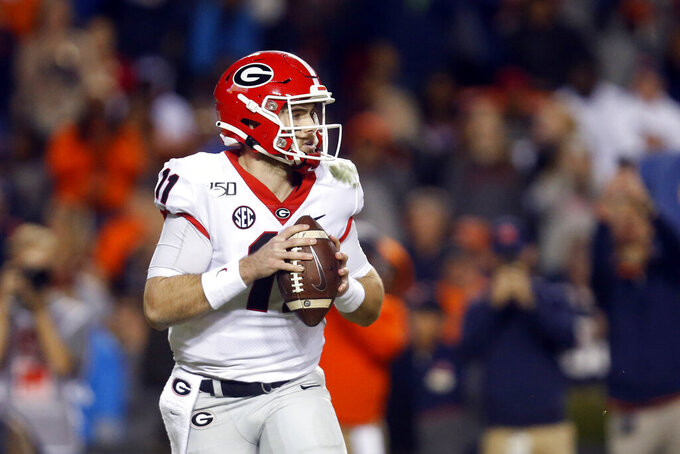 Georgia quarterback Jake Fromm (11) looks to pass during the second half of an NCAA college football game against Auburn, Saturday, Nov. 16, 2019, in Auburn, Ala. (AP Photo/Butch Dill)

Georgia must keep winning to ensure a spot in the College Football Playoff. If the Bulldogs can beat A&M, knock off Georgia Tech in the regular-season finale, and then upset top-ranked LSU in a likely Southeastern Conference title game matchup, they’ll be assured of making the playoff for the second time in three years. For Texas A&M, this is a chance to give coach Jimbo Fisher a signature win. The Aggies’ losses this season have been against No. 3 Clemson, No. 5 Alabama and No. 16 Auburn.

Georgia’s defense against Texas A&M QB Kellen Mond. The Aggies junior is just 83 yards passing from joining Heisman Trophy winner Johnny Manziel as the only players in school history throw for 7,000 yards and rush for 1,000 yards. His dual-threat skills will be challenged by a Georgia defense that ranks among the national leaders in points allowed (10.5 per game), rushing yards (75.5) and total yards (267.2).

Georgia: QB Jake Fromm threw for five touchdowns in the last two games, but he completed just 26 of 57 passes (45.6%). The Bulldogs will be looking to improve their passing efficiency against the Aggies.

This will be the first SEC meeting between the teams — seven years after Texas A&M joined the conference. ... This is the first time they have played since the 2009 Independence Bowl, when the Bulldogs prevailed 44-20. ... The Aggies are making their first trip to Athens since 1980, when Georgia romped to a 42-0 victory on the way to winning the national championship. ... Georgia has already clinched its third straight SEC East title. ... Texas A&M leads the SEC in time of possession at 33:55 per game. ... The Aggies are coming off a 319-yard rushing effort against South Carolina, its most in a game since 2016. ... Georgia’s D’Andre Swift is the fifth player in school history to put up a pair of 1,000-yard rushing seasons. ... Fisher is going for his 100th career win as a head coach.