No. 4 TCU looks to avoid another CFP setback at Baylor 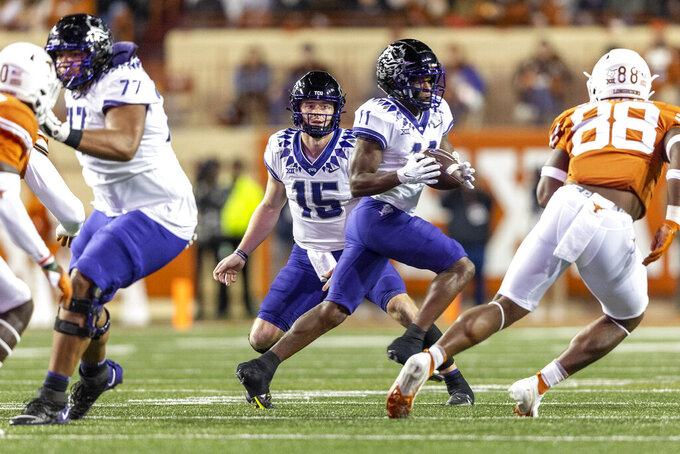 The Horned Frogs have already clinched a spot in their second Big 12 championship game, but have to keep winning to make the College Football Playoff. Defending league champion Baylor has to beat TCU and then Texas, plus get a lot of help, to get back in the title game. When the two teams shared the Big 12 title in 2014, the first year of the CFP when the league didn't have a championship game. TCU's only loss that season was 61-58 at Baylor. They were first two teams left out of the inaugural four-team playoff.

TCU running back Kendre Miller vs. Baylor defense. Miller has run for more than 100 yards in five consecutive games, and seven of eight. He has a rushing touchdown in 11 games in a row. Miller, second in the Big 12 with 114.7 yards rushing per game, and Baylor freshman Richard Reese are tied for the league lead with 13 rushing TDs. The Bears are third in the Big 12 allowing 132.8 yards rushing per game.

TCU: LB Johnny Hodges, a junior transfer from Navy, is coming off a season-high 11 tackles against Texas. He leads the Frogs with 66 total tackles, and is tied for 12th in the league with 6.6 per game.

Baylor: Since back-to-back 300-yard passing games to start October, QB Blake Shapen has averaged only 177.5 yards passing over the past four games with two touchdowns and five interceptions.

Reese is second among NCAA freshman for rushing yards (852) and TDs (13). He is just 30 yards shy of breaking Baylor's freshman record 881 set by Shock Linwood in 2013. ... TCU linebacker Shadrach Banks has a last-minute interception in last year's 30-28 win for the Frogs. That is still Banks' only career pick. ... The Frogs have won six of the last seven games in the series, the loss coming in triple overtime in 2019. ... Baylor will recognize 25 seniors at their final home game.