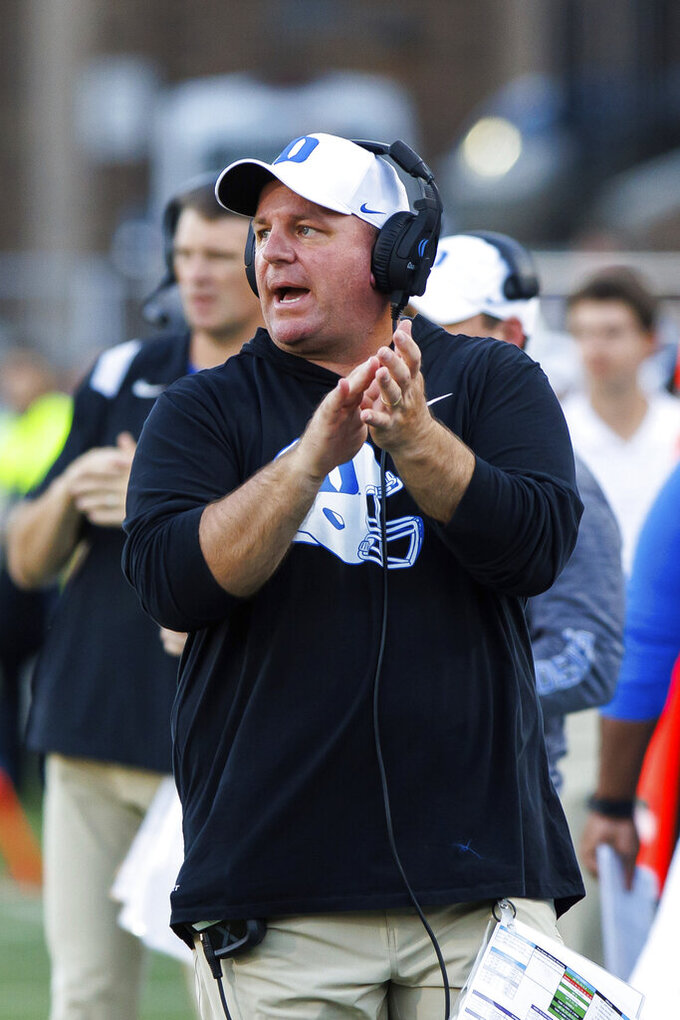 No. 5 Clemson at No. 21 Wake Forest. The preseason favorite Tigers (3-0, 1-0 ACC) are starting a two-week stretch that could allow them to take complete control of the league's Atlantic Division race. First comes a trip to face the reigning division champion Demon Deacons (3-0, 0-0).

Clemson had won six straight league titles before Wake Forest reached last year's ACC championship game. A win Saturday followed by a victory next week at home against No. 12 North Carolina State would give the Tigers wins against their two top division challengers.

The Demon Deacons' last win against Clemson came in 2008, which led to the ouster of then-coach Tommy Bowden and the promotion of current Tigers coach Dabo Swinney as an interim choice.

Duke at Kansas. It sounds like a basketball matchup befitting a Final Four. Instead, it's a meeting of 3-0 teams.

For the Blue Devils, early success has come under first-time head coach Mike Elko, including a win at Northwestern of the Big Ten. For the Big 12's Jayhawks, second-year coach Lance Leipold has already surpassed last season's win total.

A win will give Duke its first 4-0 start since 2018. As for Kansas, it would mark the first time the Jayhawks have won more than three games since 2009, when they started 5-0.

Syracuse (3-0, 1-0) has been a pleasant surprise to start the season for Dino Babers, led by Garrett Schrader throwing for eight touchdowns with no interceptions. Things haven't come as easily for Virginia.

Playing under first-year coach Tony Elliott, the Cavaliers have eight turnovers to tie for the most of any Bowl Subdivision team. The presence of veteran quarterback Brennan Armstrong gives the Cavaliers a chance to put up points, but they're a 9 1/2-point underdog for Friday, according to FanDuel Sportsbook.

Boston College's Zay Flowers is leading the conference in receiving at 95.0 yards per game entering Saturday's game at Florida State.

The third-year receiver has 22 catches for 285 yards and three touchdowns in the first three games. His 7.3 grabs per game are tied for 13th in the Bowl Subdivision ranks.