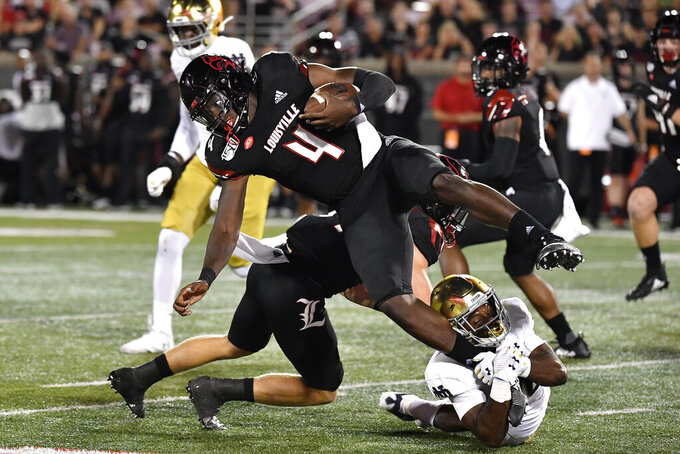 Ian Book ran for one touchdown and threw for another, Jahmir Smith rushed for two scores and the No. 9 Fighting Irish beat Louisville 35-17 on Monday night.

Tony Jones Jr. rushed 15 times for 110 yards, including an 11-yard TD, as the Fighting Irish worked harder than expected to put away the rebuilding Cardinals in Scott Satterfield's debut as coach.

"There's a litany of things we can get better at," he said. "We still won the game, and we have some good things to take away."

Starting good was important to the Irish in their first game since a 30-3 Cotton Bowl loss to Clemson last December in the College Football Playoff semifinal. Besides wanting to put that defeat behind them and mounting another national championship run, Kelly was interested to see how his team replaced key players in many phases, especially on defense.

Their answer to Louisville's challenge might have been the most impressive part.

Notre Dame trailed 14-7 in the first before Jones' score tied it, and Book followed with an 11-yard score just before halftime.

Book's TD came after a bizarre sequence featuring three consecutive fumbles between the teams, the last of which Notre Dame recovered at Louisville's 20. The Irish forced five fumbles overall and recovered three.

Book hit Tommy Tremble with a 26-yard TD pass midway through the third for a 28-14 lead. He finished 14 of 23 passing for 193 yards. Smith rushed for touchdowns of 3 and 1 yards and totaled 24 on eight carries.

Louisville junior quarterback Jawon Pass rushed for touchdowns of 8 and 17 yards in the first quarter, but the Cardinals struggled after that and managed only Blanton Creque's 46-yard field goal midway in the fourth quarter.

Satterfield nonetheless found bright spots in the Cardinals' performance against Notre Dame, a storied program coming off a quest for a national championship.

"I was extremely proud of the way our guys played," he said. "The fight, the energy they had was awesome to see. The one thing coming into this game that we didn't know about was when they faced adversity, how were they going to react to it. And they did a great job."

Notre Dame freshman punter Jay Bramblett averaged 39.3 yards on six kicks, with a long of 46 and two inside the 20. Junior placekicker Jonathan Doerer made all five extra points and averaged 61.8 yards on six kickoffs. Both were taking over for record-setters in Tyler Newsome and career scoring leader Justin Yoon, respectively.

Pass started his second consecutive opener for Louisville and contributed with his feet and arm. He rushed 16 times for 67 and both scores while completing 12 of 27 passes for 134 yards. There were also three lost fumbles, one of which Notre Dame converted into the go-ahead score.

"I did alright, but we didn't win," he said. "I didn't do enough to help us win. We just have to go back to work and get better."

The Irish struggled, but should remain in the Top 10.

Notre Dame: The defense initially looked shaky before adjusting to keep Louisville out of the end zone after the first quarter. Four sacks highlighted that performance, along with the fumble recoveries that stopped drives and momentum. Book's feet helped set the offensive tone as the Irish rushed for 232 yards. He then threw the key touchdown for a cushion they never lost.

Louisville: The Scott Satterfield Era got off to an exciting start as the Cardinals showed more energy and execution on both sides of the ball than during a 2-10 season in grabbing an early lead. They have more work ahead after failing to sustain the effort, struggling to move the ball and coughing it up five times. They did outrush the Irish by 19 yards, though.