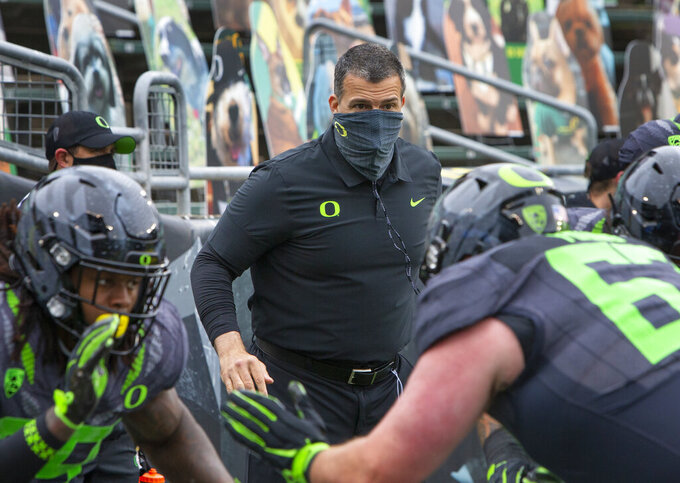 CORVALLIS, Ore. (AP) — Although it's no longer called the Civil War, the rivalry between Oregon and Oregon State is still heated even in a short and unusual season.

The two teams will meet Friday for the 124th edition of the rivalry, which dates back to 1894.

This season and going forward, however, the game — or the meetings between the two schools in any sport — will not be known by the Civil War nickname.

Amid racial injustice marches nationwide, the universities came together this summer and decided the name, while unintended, was too closely associated with a war meant to perpetuate slavery.

This season's rivalry game is important to the ninth-ranked Ducks, who are undefeated and — potentially — vying for a spot in the College Football Playoff if everything breaks their way. Oregon (3-0) was ranked No. 15 in the first CFP rankings released this week.

Although it's most likely a longshot, wins are key to keeping any playoff hopes Oregon might have alive. Oregon coach Mario Cristobal said the playoff topic was broached with the team following the too-close-for-comfort 38-35 victory over UCLA last weekend.

“Whoever takes care of their business throughout the season, it will show at the end of the year in the CFP rankings," Cristobal said. "So our complete focus and attention is on us getting better, and our opponent this upcoming week, so that's the way it was addressed.”

Oregon State (1-2) is coming off its first win of the season, a 31-27 victory over Cal. Quarterback Tristan Gebbia ran for a 1-yard touchdown to put the Beavers in front in the fourth quarter, and Jermar Jefferson ran for 196 yards and a touchdown.

The Beavers are hoping to build on the victory, and a win over the Ducks would be a nice way to do it.

“I feel grateful that we're headed toward being able to play this game in 2020, and having a really good team come in here to see where we stack up and challenge us,” coach Jonathan Smith said. “It's definitely different, I think all of us get that, but I'm grateful to be able to play it.”

Oregon holds a 66-47-10 advantage in the series and has won 11 of the last 12 games against the Beavers. This year is different because usually the meeting between the two teams is played at the end of the regular season.

Oregon States' running back was named the Pac-12 Freshman of the Year two years ago after running for 1,380 yards and 12 touchdowns. He was hampered by injuries last season, but appears to have regained his form in 2020.

Jefferson earned Pac-12 offensive Player of the Weeks honors on Monday after his 196 rushing yards against Cal. He is averaging 149.7 yards a game so far this season, and has run for 100 or more yards in each of the Beavers’ first three games.

Oregon starting quarterback Tyler Shough stepped into big shoes this season in replacing Justin Herbert, and so far he's done well. Shough has thrown for three touchdowns and 300-plus yards in the past two games, one of just four QBs nationwide with as many TDs and passing yards in consecutive games.

Additionally, his eight touchdown passes lead the Pac-12. He’s also rushed for 197 yards and a score.

Besides the game's nickname, there's one other obvious thing that's going to be different this season: No fans. The state of Oregon doesn't allow for even limited numbers of attendees as coronavirus cases continue to rise.

“I feel for the fans, I do,” Cristobal said. “because you can feel the enthusiasm, the energy, the anticipation of games like this, you can just feel it in the community, and in our town, our city. But it is what it is. Either way I know that our guys are really looking forward to the opportunity to play a team that is playing as well, a team that's coached as well, and coming off a huge win, as Oregon State.”