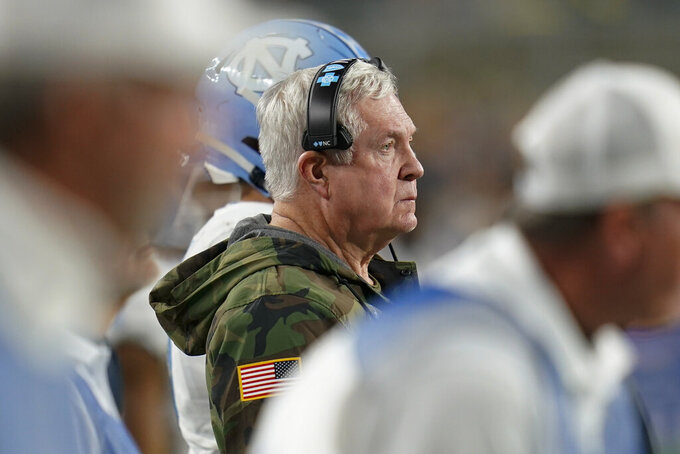 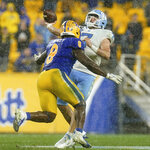 North Carolina’s quick success in Mack Brown’s second tenure has come with Sam Howell at the helm of high-scoring offenses. The Tar Heels could get an extended look Saturday at how things will look without him.

The Tar Heels host Wofford from the Championship Subdivision on Saturday, a one-week break from Atlantic Coast Conference play before visiting 25th-ranked rival North Carolina State in next week’s finale. There are 22 players set to participate in Senior Day farewell ceremonies – a list that includes Howell, a junior and top NFL prospect - as the Tar Heels try to become bowl eligible in their final home game.

And it’s unclear whether Howell will be ready to play due to an upper-body injury suffered in last week’s loss to No. 20 Pittsburgh, with Brown saying he’s a gametime decision.

“We’ll see how it is come Saturday,” Howell said. “But it’s something I’m putting a lot of time into. I really want to get out there as soon as possible, get back out there with my team."

Brown has said in preseason that the team was treating this year as though it would be the last for Howell before jumping to the NFL, then said Monday that this would in fact be Howell’s final home game. Howell was mum about his future a day later, saying he was focused on finishing strong and that “there’s still a lot of decisions to be made.”

“He’s been the face of the program for three years,” Brown said.

If Howell can’t play, sophomore Jacolby Criswell or freshman Drake Maye would start for the Tar Heels (5-5). If he does, Criswell and Maye could get valuable reps for the future if the Tar Heels manage to build a comfortable lead against the Terriers (1-9).

“You would love to get both of them some time because they’re our future,” Brown said. “They’ll be competing in the spring for the job. And this is a great opportunity for both of them to show what they can do.”

Some other things to know about Saturday’s Wofford-UNC game:

Wofford won consecutive Southern Conference championships and reached the NCAA FCS playoffs in 2018 and 2019 to open Conklin’s tenure. Things have been tougher since.

Wofford went 1-4 in a truncated season postponed to spring at the FCS level by the COVID-19 pandemic, and went winless (0-8) in Southern Confernce play for the first time in school history. A loss Saturday will give the Terriers their lowest full-season win total since going 1-10 in 1987.

“It’s an anomaly in terms of what we’ve had to go through this year in 2021,” Conklin said. “There’s no doubt that it’s going to be different moving forward. We’ll get older, we’ll get stronger. At a place like Wofford, that’s what you have to be.”

Wofford has lost 21 straight against FBS teams since beating Louisiana-Monroe in 2000. The Terriers have scored more than 14 points in only four of those games.

The 22 UNC players participating in Senior Day ceremonies include top offensive guard Joshua Ezeudu, a fourth-year junior. Brown said some players on the list are still mulling options but “wanted to go through Senior Day just in case” they don’t return.