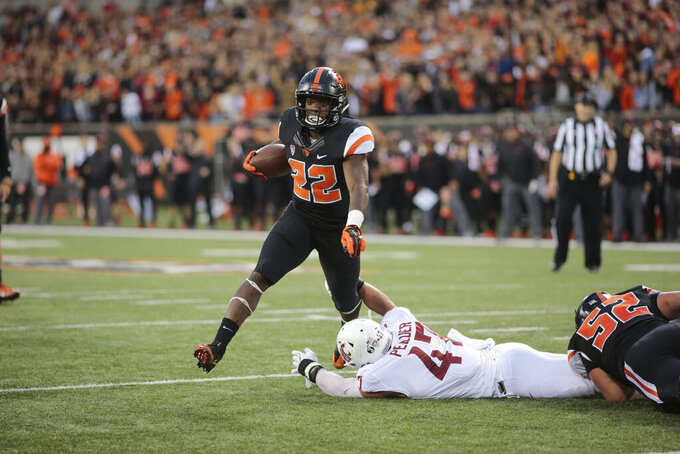 FILE - In this Oct. 6, 2018, file photo, Oregon State running back Jermar Jefferson (22) carries the ball against Washington State during an NCAA college football game in Corvallis, Ore. The Pac-12 freshman of the year, lured out of southern California, delivered seven 100-yard games, including 254 and two touchdowns against Arizona State. The Beavers finished 2-10 and are probably still another year away from even thinking about a postseason push. (AP Photo/Timothy J. Gonzalez, File) 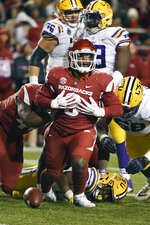 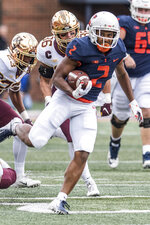 Not every college football team makes it to a bowl, though 39 postseason games in the Bowl Subdivision can make it seem that way.

That leaves more than 50 teams whose seasons will end before December. Among those unfortunate squads there are still some terrific players who will go largely unnoticed as their teams toil. Or, more optimistically, maybe they will lead a big turnaround for their rebuilding programs.

Time to recognize some of the best players playing on teams that weren't bowl-eligible last year and probably won't be this season:

The final season of Bobby Petrino's tenure as Louisville coach was painful to watch. The Cardinals went 2-10 and were usually not competitive. New coach Scott Satterfield is almost starting from scratch. The roster needs a massive overhaul, but he has a left tackle in Becton who could play for a playoff contender. The 6-foot-7, 355-pound junior needs some refinement, but his athleticism could make him a top-20 NFL draft pick.

Bowman was tearing it up as a freshman for the Red Raiders until a partially collapsed lung limited him to eight games. He passed for 2,638 and 17 touchdowns in those games, and after he was gone so were the Red Raiders' bowl chances. That led to coach Kliff Kingsbury getting fired, though things worked out OK for him. Bowman's presence on this list might be a bit of a stretch. It wouldn't be all that surprising if the Red Raiders get back to bowl eligibility in Matt Wells' first season as coach.

Heading into the Year 4 of Lovie Smith's tenure, the Illini are still looking to reach bowl eligibility for the first time under the former Super Bowl coach. Corbin, a senior with blazing speed, broke out last season with 1,085 yards rushing on 8.5 yards per carry. He is only 200 pounds, but Illinois will probably need to get him more than 144 touches if it wants to go from four wins to six and a postseason game.

The Razorbacks did not win an SEC game in coach Chad Morris' first season, but Harris was one of the best — and busiest — linebackers in the conference. Harris led the SEC in tackles with 118. Arkansas is leaning on inexperienced players and underclassmen on defense again, which doesn't bode well for a major bounce back in Year 2 under Morris. Harris should be busy again.

The Beavers were in a complete rebuild last year under first-year coach Jonathan Smith. Without much to work with, Smith made the freshman the focal point of the offense after luring him out of California. Jefferson delivered seven 100-yard games, including 254 and two touchdowns against Arizona State. The Beavers finished 2-10 and are probably still another year away from even thinking about a postseason push, but Jefferson could end up carrying an even bigger load as a sophomore.

For the first month and a half of last season, Shenault was one of the best players in the country. He scored 11 touchdowns in six games and the Buffaloes started 5-1. A foot injury forced him out of three games and he wasn't the same when he returned. Colorado finished the season with seven straight losses to get coach Mike McIntyre fired. Shenault is a potential All-American and if he stays healthy the Buffs are a team worth watching even as new coach Mel Tucker rebuilds.

By John Zenor 14 minutes ago
By Steve Megargee 3 hrs ago
By The Associated Press 5 hrs ago
By Ralph D. Russo 12 hrs ago
By Eric Olson 12 hrs ago