Pickett, Howell square off as No. 25 Pitt hosts UNC 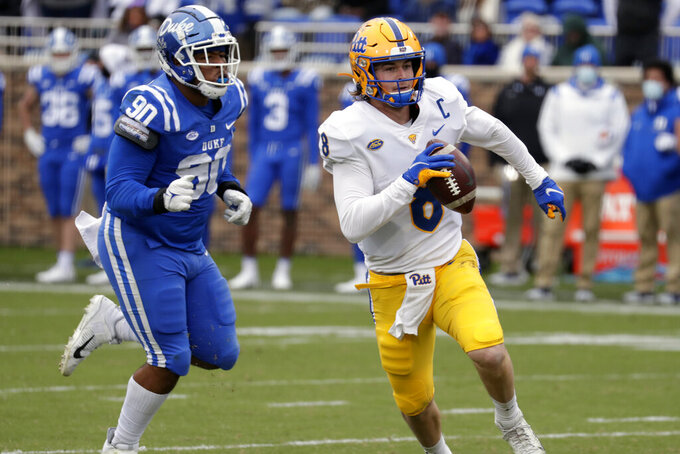 PITTSBURGH (AP) — Kenny Pickett stole Sam Howell's thunder. The Pittsburgh quarterback's brilliant play is commanding Heisman Trophy-attention, which his counterpart at North Carolina hogged during the run-up to the 2021 season.

Now Pickett and the 25th-ranked Panthers are eager to grab something more valuable: The Coastal Division title most thought was the Tar Heels' to lose two months ago.

Heading into Thursday night's showdown at Heinz Field, Pitt (7-2, 4-1 Atlantic Coast Conference) and not UNC (5-4, 3-3) has the inside track for a spot in the ACC title game next month. It's Pickett — more than Howell — who has dazzled while leading the top-scoring offense in the country.

Yet the Panthers remain wary. The early season malaise that dogged the Tar Heels has lifted. A 58-55 upset over previously unbeaten Wake Forest last week has provided Howell and North Carolina a needed jolt and set the stage for what could be a four-hour track meet.

“Whatever happened to 14-3?” said Pitt coach Narduzzi, a former linebacker and defensive coordinator. “Are those days gone? They’re gone."

If the Tar Heels can beat a ranked opponent for a second time in six days, the chaos that's become the Coastal Division's calling card returns.

Particularly on defense. The Tar Heels are giving up a staggering 33.4 points per game, next-to-last in the ACC. And now they have to face Pickett, who needs just 113 yards passing to break Alex Van Pelt's school record for career passing yardage.

A victory and Pitt could possibly clinch its second Coastal title in four years at home against Virginia on Nov. 20. Yet Narduzzi, Pickett and the Panthers are hardly getting ahead of themselves. Both of Pitt's losses this year have come as sizable favorites at home, games in which Pickett combined to throw for 901 yards and nine touchdowns.

Yes, Pitt's best chance to win comes if Pickett is Pickett. Yet he can't do it alone.

“We’re just focused on being as good as we can be on defense,” Narduzzi said. “That’s going to be key."

While Howell's passing numbers are a bit down from a year ago, he's proven to be more than a capable runner. Howell has 699 yards and eight touchdowns rushing and he's found a dynamic backfield mate in Tennessee graduate transfer Ty Chandler, whose 13 touchdowns are tied for eighth in the Bowl Subdivision ranks.

“I just want to stay consistent and continue to help out this team any way I can, continue to be productive and go get three more wins, keep this ball rolling,” Chandler said.

Howell and Chandler face a run defense ranked 16th in FBS by allowing 108 yards per game.

It will be a compressed week for both Pittsburgh and UNC.

The Panthers ran 86 plays while the Blue Devils ran 88 in their meeting at Duke. A short drive away in Chapel Hill, Wake Forest ran 90 plays while North Carolina ran 78 in a game that lasted 5 minutes shy of the 4-hour mark.

“I’ve told the guys it’s like the NFL: You play on Sunday and you play again on Thursday, so they’re not going to have a lot of time to get some physical stuff done,” Brown said.

Pitt last did the Saturday-Thursday combination in 2015 in which a 23-20 win over Syracuse was followed by a 26-19 setback against the Tar Heels. Narduzzi said he believes his staff has come up with a better plan on how to deal with the quick turnaround.

More than three dozen NFL front office members — from scouts to general managers — will be in attendance to watch two quarterbacks who figure to hear their names called early in next spring's draft. Yet they're hardly the only ones who will have a chance to make an impression on the pros.

“Everything is on display when people are at the game, whether it’s ESPN people, GMs, it doesn’t matter,” Narduzzi said. “Microscope is on all of our kids.”

Pitt and UNC have played a series of nail-biters since the Panthers joined the ACC in 2013. All seven meetings — six wins by the Tar Heels — have been decided by seven points or less.

That could make the kicking game a major factor. Pitt's Sam Scarton has made 47 of 48 extra points and 12 of 13 field goals. North Carolina's Grayson Atkins is just 12 of 18 on field-goal attempts this season.