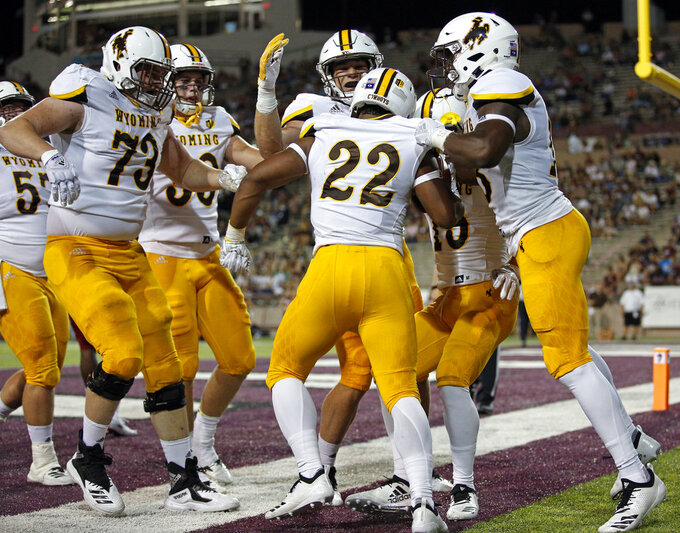 Wyoming running back Nico Evans (22) is congratulated by teammates after his touchdown against New Mexico State in the first half of an NCAA college football game in Las Cruces, N.M., Saturday, Aug. 25, 2018. (AP Photo/Andres Leighton)

CHEYENNE, Wyo. (AP) — Washington State coach Mike Leach will be getting back to his roots when his Cougars open their season at Wyoming on Saturday.
Leach is a Wyoming native, growing up in Cody just east of Yellowstone National Park where he developed an interest in coaching while playing sports at Cody High School.
"I started coaching baseball — Little League, Babe Ruth — from 15 to my sophomore year in college," Leach recalled this week. "That's where I discovered I liked coaching and a lot of that developed.'"
Leach enters his 17th season as a head football coach with a 122-81 career record, including a 38-38 mark in six seasons at Washington State. Leach is the first coach in school history to lead the Cougars to three bowl games during his first five seasons.
He was the 2015 Pac-12 co-coach of the year and was a George Munger Coach of the Year semifinalist the past two seasons.
Wyoming coach Craig Bohl said Leach is a "really bright guy" who can take complicated football concepts and make them simple.
"He doesn't try to out-trick everybody to show how smart he is, and so there's brilliance there," Bohl said.
But Bohl is no slouch as a coach either and he sees the value of beating a major program like Washington State for a Wyoming program that he has been building for five seasons now and that is coming off a season-opening 29-7 win at New Mexico State last weekend.
"They're a nationally recognized program and they have good players and they're well-coached, so it going to be a great opportunity for our football team," he said.
The Cougars are making their first trip to Wyoming since 1989 when they take the field Saturday afternoon in Laramie, which is about 360 miles from Cody.
Other things to watch:
STRENGTH VS STRENGTH: The game will feature Wyoming's stingy defense against the explosive offense of Washington State. Last week in the win at New Mexico State, the Cowboy defense allowed the Aggies only 135 yards of total offense and recorded four sacks and eight tackles for loss. Wyoming ranked 16th in the nation in scoring defense last year, allowing opponents 17.5 points per game, and was No. 1 in the NCAA in takeaways with 38.
In 2017, Washington State was No. 2 in the NCAA in passing offense with 366.8 yards per game. Under Leach, the Cougars offense has led the Pac-12 in passing offense in five of the last six seasons. However, Washington State returns just four offensive starters from last year's team.
SIGNAL-CALLERS: Leach was holding his decision on a starting quarterback close to the vest leading up to Saturday's game. Tyler Hilinski was expected to be the Cougars' replacement for Luke Falk, who threw for 3,593 yards and 30 touchdowns last season. Falk is now with the NFL's Tennessee Titans. But Hilinski took his own life in January.
Speculation is that graduate transfer Gardner Minshew will get the nod because of his experience playing the past two years at East Carolina. But Leach indicated earlier this week that a starter won't be named until game time.
"We've got four quarterbacks and one of them will play," Leach said. "It will be a thrill a minute to discover which one that will be."
With quarterback Josh Allen now playing in the NFL for the Buffalo Bills, Wyoming broke in a successor last week in redshirt freshman Tyler Vander Waal, who completed 13 of 21 passes for 137 yards against New Mexico State.
OPENERS: Wyoming has won 13 of its last 15 home openers while the Cougars have lost their last seven season-openers on the road. Washington State's last road win to start the season came in 2004, when it beat New Mexico 21-17.
___
More AP college football: https://apnews.com/tag/Collegefootball and https://twitter.com/AP_Top25