Purdue stays in title chase with 17-9 win over Northwestern 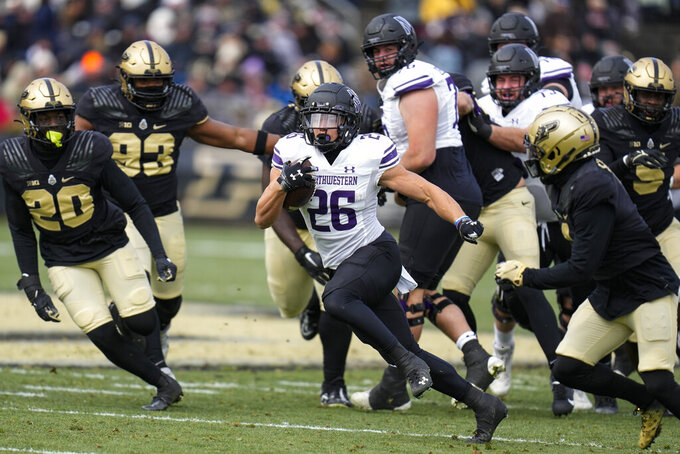 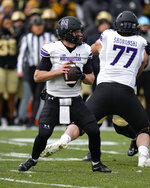 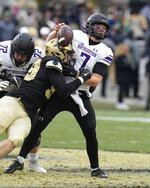 He could finish it by leading the Boilermakers to their first Big Ten championship game.

“You have a lot that you're playing for, people are talking about postseason stuff and it’s not like we’re blind to it,” O'Connell said when asked about what's at stake next week. “It's up to us to make sure we’re locked in and focused on the task at hand.”

Purdue (7-4, 5-3) wants to keep it simple. A win next week at rival Indiana, coupled with an Iowa loss, sends the Boilermakers to Indianapolis for championship weekend.

Coach Jeff Brohm knows the challenge will be even greater if they're playing in the same cold, blustery conditions that made Saturday's field so slick. But the Boilermakers have proven they can adapt.

O'Connell was 16 of 25 with 159 yards and found his childhood friend, Charlie Jones, six times for 46 yards and one score. The defense allowed its lowest point total in league play and Jack Sullivan's late fourth-down sack near midfield sealed the victory.

Northwestern (1-10, 1-7) has lost 10 straight since an opening-day win over Nebraska in Ireland, this time in the starting debut of second-year quarterback Cole Freeman. He was 9 of 20 with 78 yards and one interception while losing a fumble.

“He gave everything he’s got and that was no surprise to anyone here. That’s the way he’s been since he came into the locker room,” coach Pat Fitzgerald said. “We just had to make a couple more plays. Purdue is in the driver’s seat in the Big Ten West for a reason.”

Purdue never really gave the Wildcats a chance after O'Connell's throw across the field to Jones, who made an inside cut to evade a defender and jogged into the end zone for a 7-0 lead.

O'Connell's 3-yard TD pass to Payne Durham made 14-3 at halftime and Northwestern cut the deficit to 14-9 when Evan Hull scored on a 2-yard run early in the fourth quarter. Hull had 22 carries for 105 yards.

“A win’s a win,” Durham said. “It might not have been the prettiest, but it counts as a W in our column.”

Northwestern: With the top two quarterbacks, Brendan Sullivan and Ryan Hilinski, out because of injuries, not much changed with Freeman. The offense still struggled mightily to score points though the Wildcats did avoid their sixth double-digit loss this season.

Purdue: The Boilermakers did what they needed to Saturday — and not much more. They held off the West Division's last-place team despite losing their top runner, Devin Mockobee on the game's opening series, and their starting center Gus Hartwig, perhaps for the season. Brohm said Hartwig would “be out quite a while.”

When Jalen Graham saw open field after picking off Freeman early in the third quarter, he thought he had Purdue’s third defensive touchdown of the season.

Instead, the fourth-year linebacker started high-stepping around the Wildcats 20-yard line, drawing an unsportsman like conduct penalty that took the touchdown off the board. Four plays later, the wind knocked down Fineran’s 47-yard field goal attempt short to keep the score 14-3.

“We can’t have that happen, of course,” Brohm said.

Sixth-year quarterback Austin Burton made a cameo appearance for Purdue, rushing once for 5 yards in a notable play for the family of the late Ron Burton.

Purdue: Will play for the Old Oaken Bucket – and a division title — next Saturday at Indiana.