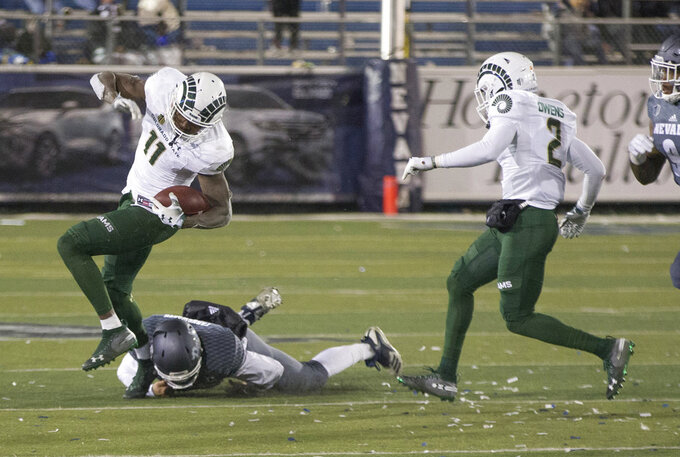 In the other, a reeling Colorado State that's dropped three straight.

Utah State coach Matt Wells views the conference schedule almost like a boxer and focuses on one round at a time. The Aggies (9-1, 6-0 Mountain West) want to stay off the Canvas Stadium mat Saturday at Colorado State (3-7, 2-4) and shuffle into Round 8.

Absolutely no looking ahead, tempting as it might be. Because looming is a showdown at No. 23 Boise State next week that could ultimately decide the West side representative for the conference title game.

For now, the attention is simply on trying to extend their winning streak to 10 in a row. Utah State hasn't won in Fort Collins, Colorado, since 2012.

"Our expectation is to be Mountain West champs, and that is what we're trying to do," Wells said . "It's Round 7 for us."

The tale of the tape looks rather lopsided: The Aggies are one of the most explosive offenses in the nation while the Rams defense surrenders 463.9 yards a game. But it will be senior day and that could alter the equation.

"They will be emotional," Wells said. "It's a team that has a lot of talent and can rally together."

"I don't think you're going to stone-cold stop this offense. They're balanced and play extremely well," Colorado State coach Mike Bobo said. "It comes down to getting guys on the ground."

That's proven easier said than accomplished. Leading the way for the Aggies will be sophomore quarterback Jordan Love , who was named the Mountain West offensive player of the week for a fifth time this season. He's coming off a game against San Jose State in which he threw for 491 yards and five TDs.

His teammates describe Love as mellow and fun-loving, but always pushing for more points and more yards.

"He's competitive. Every time we go out for a drive, he rallies us and says, 'We're going to go down and score,' or, 'Let's get this first down,'" tight end Dax Raymond said. "I don't think I've ever seen him anxious, angry, happy or sad. He's just mellow, perfect, which is what you need from a QB."

Here are things to know in a series that Colorado State leads 39-33-2:

TORRID START: This is Utah State's second-best start in program history, trailing only the 1961 squad led by Hall of Famer Merlin Olsen that began 9-0-1. That team went on to finish 9-1-1.

SCORING IN ABUNDANCE: The Aggies have already established team records with 66 touchdowns and 513 points. The previous best was 60 TDs in 2011 and 454 points in '12. "It's just fun," Raymond said. "If you blink, you miss something."

HIGH PRAISE: Colorado State junior wideout Preston Williams has 78 catches for 1,020 yards this season. His 78 receptions are already the fourth-most in team history. The record is 100 set in 2017 by Michael Gallup, who now plays for the Dallas Cowboys. Wells said of Williams: "He's a very talented young man who we better know where he is on the field every single snap."

BALANCING ACT: Bobo walks a delicate line in deciding between playing the upperclassmen or giving the younger ones some reps with an eye toward next year. "I owe it to everyone on the football team that the best guy plays," Bobo said. "Regardless of age or looking forward, we still want to put our best foot forward to win the ball game."

POLL DECISIONS: Despite a high ranking in other polls, the Aggies checked in at No. 23 for the recent College Football Playoff rankings. "A lot of that has to do for Group of Five, is what you've done the year before and how many years you can stack on consecutively of being very good to get you consideration to be ranked high," Bobo said. "It will all play out at the end."