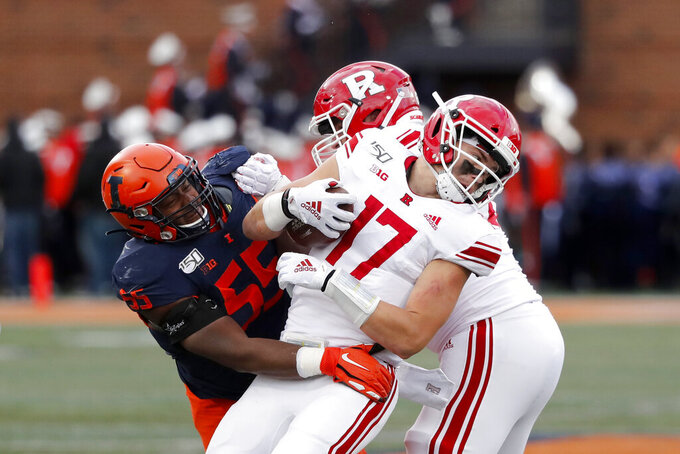 "Dele, he's been that for us all year," Illinois coach Lovie Smith said. "He was feeling a little sick before the game, but he's one of our captains and a motivator for us. He's productive."

Campanile, named to the interim spot when coach Chris Ash was fired after four games this season, coached Langan in high school in New Jersey.

Aaron Young carried the ball 12 times for 67 yards to lead the Scarlet Knights. Mohamed Jabbie had three receptions for 64 yards and Rutgers' only touchdown.

"We needed to flip the switch at halftime," Smith said. "We had opportunities early, but the takeaways just jump-started us when we needed it most."

Campanile knew what his team was facing coming into the game.

"We have a lot of young players out there, and we knew that they are kind of a turnover (forcing) machine," Campanile said. "They really caught us in the third quarter and the game got away from us."

Illinois now needs just one win out its three remaining games to secure a bowl appearance for the first time since 2014.

"We like how we have played in the second half of the season, going 3-0 against Big Ten teams," Smith said. "We have to be pumped up now, maybe more so than at any time since I got here. We're one game from being bowl eligible and that is going to lead us the rest of the season."

That path includes road games against Michigan State and Iowa before finishing up at home against Northwestern.