Tar Heels, Hokies look to bounce back in ACC matchup 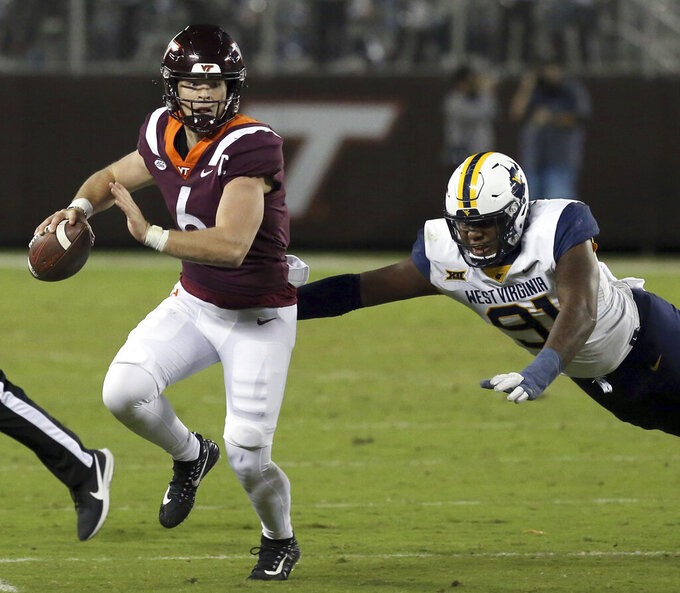 Line: North Carolina by 8 1/2, according to FanDuel Sportsbook.

UNC is coming off its first loss with last week's stumble to Notre Dame behind another poor defensive performance. Now the Tar Heels get another chance to correct the defensive mistakes that have plagued them all year when they host the Hokies in their ACC opener. For Virginia Tech, the second league game under Brent Pry offers the chance to regroup from a lopsided loss to West Virginia.

Hokies' offense vs. Tar Heels' defense. The Hokies rank near the bottom of the ACC statistics in total offense (330 yards) and 113th in the Bowl Subdivision ranks in scoring (20.2). Compare that to the Tar Heels, who rank 126th in FBS for total defense (495.2) and 123rd in scoring (39.5) — making them reliant on a high-scoring attack of their own to provide cover for those troubles.

UNC: WR Josh Downs. Downs had two touchdowns on five catches in his return from injury against Notre Dame. He has four touchdowns on 14 receptions this season.

Virginia Tech has won five of six and seven of nine meetings with UNC. ... The Hokies are 38-10 all-time against teams from the state of North Carolina. ... UNC second-year passer Drake Maye is tied for the FBS lead with 16 touchdown passes while throwing just one interception. ... The Tar Heels are 4-9 in overtime games and have lost five straight, including a six-OT game at Virginia Tech in 2019. ... UNC won the last meeting in Chapel Hill (56-45) in 2020.