Thompson to lead Kansas State against LSU in Texas Bowl 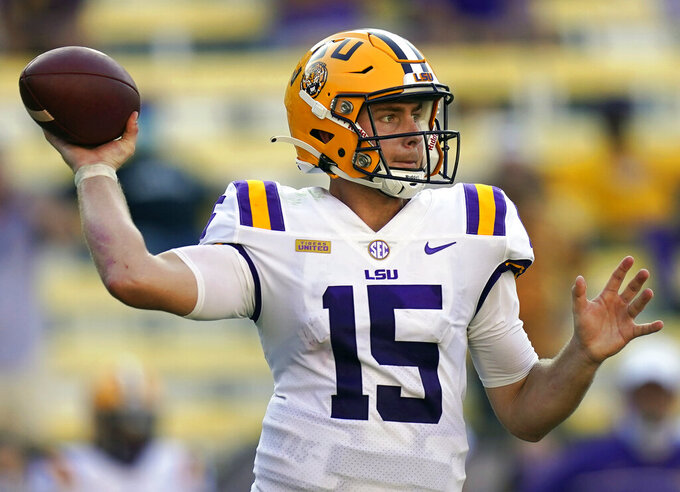 HOUSTON (AP) — Quarterback Skylar Thompson will return from an ankle injury to start for Kansas State in the Texas Bowl on Tuesday night, but LSU interim coach Brad Davis won’t say who will fill that role for the Tigers.

“We’ve got a group of guys who have all been preparing for this opportunity," Davis said. “Really, the biggest piece for us as a coaching staff is putting together a scheme that lends to what each of those guys do well.”

Myles Brennan is injured and Max Johnson transferred to Texas A&M. Freshman Garrett Nussmeier was listed first on a depth chart that LSU released this week, but it’s unclear if he’ll play because one more game would burn his redshirt year. LSU has asked for a waiver to prevent that from happening, but Davis hasn’t said if it was approved.

“You’ll have to ask him that,” Davis said. “But he’ll be in the running to play.”

If it's not Nussmeier, LSU’s other options are walk-on freshmen Tavion Faulk and Matt O’Dowd.

The uncertainty carries over to Kansas State's preparation. Linebacker Cody Fletcher isn’t sure what to expect from LSU’s offense because “we don’t know who’s going to be back there.”

But the Wildcats are thrilled to have their senior signal-caller back for the Texas Bowl, returning after missing the regular-season finale with an ankle injury. He threw for 1,854 yards and nine touchdowns this season.

Neither team qualified for a bowl last season. LSU enters the Texas Bowl having won its last two games, and the Wildcats will try and end a two-game skid.

Davis will lead the Tigers after coach Ed Orgeron, who reached a separation agreement with the team in October, chose not to coach the bowl game.

New LSU coach Brian Kelly, who signed a 10-year, $95 million deal in November, has been working to assemble his staff.

Though it's an interim role for Klein, the former Kansas State star quarterback is thrilled to get a chance to run the offense. Klein started at Kansas State from 2010-12 and finished third in Heisman Trophy voting in 2012 after throwing for 2,641 yards and 16 touchdowns.

Klein hasn’t changed too much for the bowl game but is putting some of his touches on the offense.

“We’ve done a couple of things,” he said. “But it’s about trying to keep things as simple as possible while still making a few tweaks here and there, just so they can play fast and confident and finish this thing.”

Thompson is looking forward to working with him Tuesday.

LSU suffered a blow when top rusher Tyrion Davis-Price, who ran for 1,003 yards this season, opted out of the Texas Bowl to prepare for the NFL draft. Corey Kiner will fill in against Kansas State; he rushed 65 times for 271 yards and two touchdowns as a freshman this season.

This is the second trip to the Texas Bowl in recent years for both teams.

Kansas State beat Texas A&M 33-28 in the 2016 game. Jesse Ertz threw for 195 yards and a touchdown and ran for two more scores to lead the Wildcats to the victory.