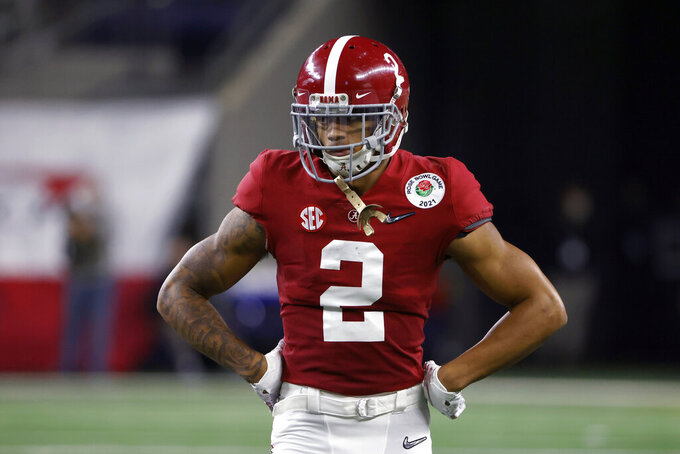 Alabama defensive back Patrick Surtain II (2) looks on against Notre Dame during the Rose Bowl NCAA college football game in Arlington, Texas, Friday, Jan. 1, 2021. Two of the best cornerbacks in the nation, Shaun Wade of Ohio State and Patrick Surtain of Alabama, will have their hands full on Monday night in South Florida. They are possibly the No. 1 and No. 2 NFL prospects at the position — which one is best is a matter of debate that the national championship game could help settle. (AP Photo/Ron Jenkins)

COLUMBUS, Ohio (AP) — Two of the best cornerbacks in the nation, Shaun Wade of Ohio State and Patrick Surtain II of Alabama, are going to have their hands full during Monday night's national championship game.

Both are highly decorated All-Americans and top NFL prospects — which one is best is a matter for a debate that this game could help settle. Every action and reaction will be dissected and evaluated in their matchups with some of the college game's best receivers.

Those duels should be fun to watch.

Wade played outside cornerback for the first time this season. The Buckeyes (7-0) will rely on him to contain DeVonta Smith, who has been nearly unstoppable against man-to-man coverage on his way to winning the Heisman Trophy, the first receiver to be so honored in 29 years.

“We got to put the best on the best and go from there,” Wade said this week.

Tide receiver John Metchie III — and the prospect of receiver Patrick Waddle playing in the game after missing much of the season with an injury — will make it even more challenging for Wade and the Buckeyes defense.

Wade has two interceptions, including a Pick-6 that ended up being the game-winning score against Indiana.

“He’s very crafty,” said Smith, who had seven catches for 130 yards and three touchdowns in Alabama's (12-0) win over Notre Dame in the semifinal. “He mixes his technique up some. He’s a technician with everything he does.”

Smith made it clear he expects to take advantage of the matchup.

Surtain will have to contend with Ohio State's duo of top receivers, Chris Olave and Garrett Wilson. Olave had two touchdown catches, including a stunning 56-yard bomb, in the Buckeyes' win over Clemson in the semifinal.

"(Olave) creates separation fast at the top of his route," Surtain said. “He's also very patient and fluid with his route running. He keeps the defense guessing. He's an excellent vertical threat. It's going to be a challenge, of course.”

Olave said practicing daily against the Buckeyes' NFL-bound defensive backs over the past three seasons helped prepare him for what Surtain will bring. Those guys included All-American cornerback Jeff Okudah, who was the third overall pick in the 2020 draft.

“(Surtain) is long, fast, physical — can't really ask for much more in a DB,” Olave said. “And I played against Okudah last year, and he's equal to him.”

“He's such a great cover guy,” Wilson said. “He doesn't need to have a lot of safety help or bracket help or inside help. He can play a guy one-on-one and that allows the defense to then bracket other receivers, or that allows the defense to cheat with linebackers and safeties to outnumber you and out-gap you in the run game. He's a tremendous player, a guy we recruited hard.”

Surtain will be returning to Hard Rock Stadium, the venue where his father starred as a cornerback in the NFL. The elder Surtain was drafted by the Miami Dolphins in 1998 and spent seven seasons with the team. The younger Surtain, who grew up in south Florida where his family still resides, got to play in the stadium as a freshman in the Tide's 2018 CFP semifinal win over Oklahoma.

Wade dismissed a suggestion that playing on the same stage with Surtain, one of three finalists for the Chuck Bednarik Award as the nation's top defensive player, provides added motivation.

“Really, no,” he said. “I'm just worried about winning this game and that's the motivation right there — winning the national championship.”