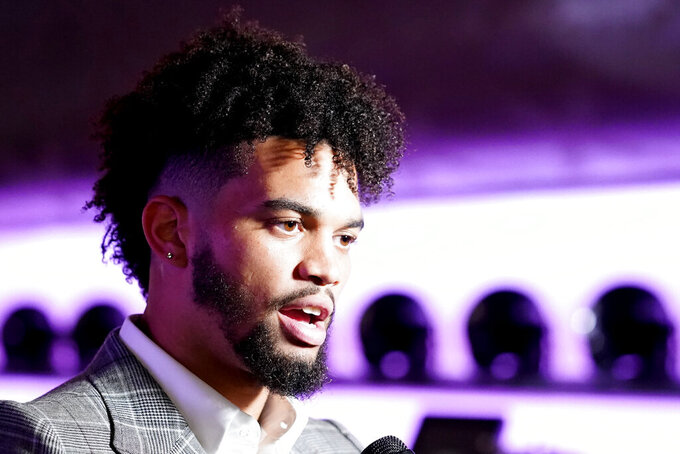 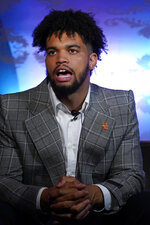 LOS ANGELES (AP) — When Brett Neilon looks around Southern California’s locker room, the Trojans’ sixth-year center sees a few teammates who were with him all the way from the heights of a Pac-12 title to the depths of this storied football program's worst season in 30 years.

Neilon also sees the nation’s top receiver at Pitt in 2021, Oklahoma’s former freshman quarterback sensation, an ex-Alabama linebacker and a few dozen other guys he just recently met, all wearing new cardinal jerseys and preparing to restore the Trojans to glory this fall.

They aren’t quite an expansion team, but college football also hasn’t really seen anything quite like these Trojans. From his vantage point between two eras of USC football, Neilon loves the view.

“It kind of feels like a whole new team,” Neilon said. “There’s a lot of excitement. There’s some of the best players in college football in there. It’s all a melting pot for a really fun, exciting season.”

Most of the Trojans share Neilon's mix of uncertainty overwhelmed by excitement about what Lincoln Riley is attempting in his first season at USC.

Rebuilding after the Trojans’ worst season in 30 years, Riley dug deep into the newly flush transfer portal to add 24 veterans from across the country. Many are elite skill-position players – including Biletnikoff Award winner Jordan Addison, ex-Oklahoma receiver Mario Williams, and two prolific running backs and two receivers from other Pac-12 schools.

The centerpiece of the group is Caleb Williams, who passed for 1,912 yards and 21 touchdowns at Oklahoma last year. The quarterback said he rejoined Riley “to be a part of something historic. I mean, being a part of USC is already historic, but trying to get USC back to what it was is also historic.”

This massive influx is joining a USC roster with 71 returning players from last season’s 4-8 team, but only 37 lettermen and just eight starters. Add in at least a dozen true freshmen, and it's clear Riley's staff has amassed a remarkable amount of new talent — and given itself a daunting task to mold it into a cohesive team capable of immediately contending for a Pac-12 title.

“This probably won't be the way we build our roster in the future," Riley said. “Because of the circumstances we were in when we came here, and because of the opportunities afforded to us, we felt that getting players in the transfer portal was the best way to get us to where we want to be. In the future, I think we will look more traditional. For now, I'm excited about this group.”

USC's unusual offseason was possible because college football is in unprecedented times amid the collision of four factors: a long-awaited regime change at an attractive, underachieving football powerhouse; the still-new transfer freedom allowing college athletes to play wherever they please; the opportunity to play for one of the sport’s top coaches without waiting in line behind his hand-picked recruits; and the chance to hitch a ride on the rising rocket of NIL earnings at schools with USC’s market size and cachet.

“USC is a blue blood, simple as that,” Caleb Williams said. “Teams and organizations and things like that, they have rough moments, and that’s all USC has had. And we’re here trying to turn that around, because I know that Shane’s not a loser. I know that I’m not a loser. These guys around us want to win. They have that in them.”

Caleb Williams and Addison are the two biggest names to join Riley, but the transfer group also includes the likes of linebacker Shane Lee, who played three seasons at Alabama; running back Travis Dye, who returns to his native LA area after a stellar career at Oregon; and four-year Colorado cornerback Mekhi Blackmon.

With so many new faces, playing time is thoroughly up for grabs in camp. Dye is the biggest name in a running back room with only one returning contributor, but he isn’t worried about anyone being left out because of Riley’s reputation for managing personnel.

“Coach Riley, he’s had several guys at the position who are all dudes before, and everybody still got to eat,” said Dye, who rushed for 3,111 yards and 21 TDs for the Ducks. “I’ve been part of teams that have won the Rose Bowl, and I’ve never been on a team with a culture so strong, where all of us have bought into it like this.”

It's still early in camp, but Riley is already at work on building camaraderie and ownership among players who largely didn't know each other until this spring. The Trojans are holding several practices at the Coliseum, partly to get the players familiar with their venerable home as it hosts a football season unlike any of the previous 99.

“It’s weird, yeah," Blackmon said. "Some of these guys I’ve played against. Me going against (ex-Colorado receiver Brenden) Rice mostly every day in practice last year, (and) he’s my teammate again. I’ve played against (ex-Stanford running back) Austin Jones, (ex-Washington receiver) Terrell Bynum and people like that. They’re my teammates now. ... Everybody’s coming together. It’s crazy.”