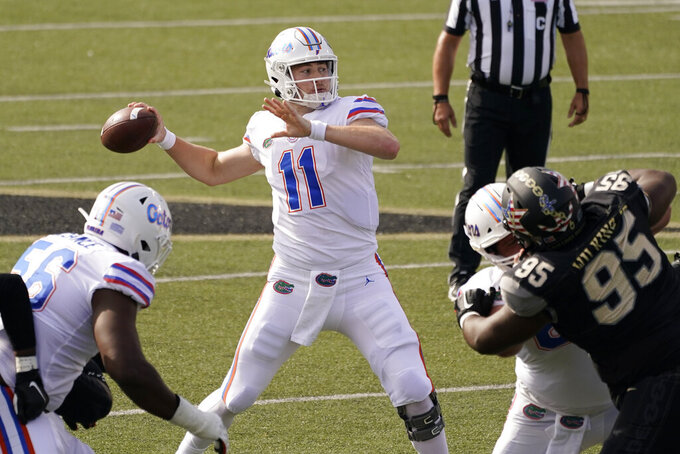 The Florida quarterback stepped in for injured starter Feleipe Franks late, rallied the Gators to 19 unanswered points in the fourth quarter and left Lexington with a 29-21 victory that vaulted the longtime backup into the spotlight for good.

“I knew watching him last year against us that he was a special talent,” Kentucky coach Mark Stoops said.

Seventeen starts and 14 wins later, Trask has improved every aspect of his game. And when No. 6 Florida (6-1) faces the Wildcats (3-5) in the Swamp on Saturday, the fifth-year senior will be a factor long before the final frame.

Trask has directed opening-possession scores six times in seven games this season, including five touchdowns. He’s been at his best early and hasn’t needed any late-game heroics. He might have gotten a chance at Texas A&M in October had running back Malik Davis not fumbled at midfield in a tie game with less than 4 minutes to play.

The Aggies kicked a field goal on the final play for a 41-38 victory. The Gators haven’t been in a tight game since, and Trask is the main reason for their success.

He reads defenses before the snap as well as any of Florida’s three Heisman Trophy winners — Steve Spurrier, Danny Wuerffel and Tim Tebow — and is more accurate than each of them.

The 6-foot-5 Trask has completed 70.7% of his passes for 2,554 yards, with a nation-leading 31 touchdowns and just three interceptions. Most quarterbacks would gladly take those numbers for an entire season. Trask has done it in seven games — against seven SEC opponents.

He is tied with Tulsa’s David Johnson (2008) and Texas Tech’s Graham Harrell (2007) for the second-most TD passes through seven games in Football Bowl Subdivision history. Only Texas Tech’s B.J. Symons (32 in 2003) threw more in his first seven games.

His stats and stature have made him regarded as a Heisman front-runner as Florida maintains its stranglehold on a spot in next month’s Southeastern Conference title game in Atlanta.

No one saw it coming, either, at least not before his performance at Kentucky last year. Trask was a career backup in high school, playing mostly in mop-up duty behind current Miami starter D’Eriq King, and spent three-plus years waiting for his turn in Gainesville.

But he didn’t flinch against the Wildcats and has been better than anyone could have expected since.

"I think about it a lot because, you know, it’s a huge moment for my career,” Trask said. “Being a backup for all that time, it kind of is waiting on that moment where you get your opportunity and that kind of was where I got my chance to really get some meaningful reps and do something good for my team.

“So, yeah, I do think about it a lot. Just kind of my like true beginnings in terms of when I finally got on the field for games, and you know it’s been a crazy journey so far. I think we’re just getting started.”

Trask threw at least four touchdowns passes in each of his first six games this season, another SEC record, but ended the streak last week at Vanderbilt. In what some called an off day for Florida’s offense, Trask still completed 26 of 35 passes for 383 yards and three touchdowns — with no turnovers and just one sack.

It just shows how high Trask has raised the bar since that night in Kentucky.