USC quarterback J.T. Daniels out for season with knee injury 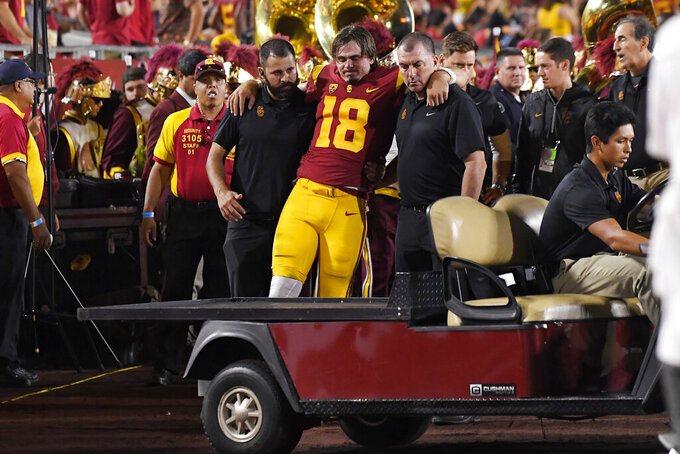 Southern California quarterback JT Daniels is helped to a cart after being injured during the first half of an NCAA college football game against Fresno State Saturday, Aug. 31, 2019, in Los Angeles. (AP Photo/Mark J. Terrill)

LOS ANGELES (AP) — Southern California quarterback J.T. Daniels will miss the rest of the season after tearing a ligament and the meniscus in his right knee during the Trojans' opener.

Daniels will redshirt this season, Helton said. With an estimated nine to 12 months of recovery from surgery, Daniels could be ready for camp next year.

"He will be missed, but we will have to move forward, and we wish him nothing but the best," Helton said. "We know he's going to be back."

Daniels was hurt when his leg twisted while he was being tackled on a blitz with 27 seconds left in the first half of USC's 31-23 victory over Fresno State. Daniels started 11 games last season for USC's first losing team since 2000, and he won a four-way competition for the starting job last month in camp.

Daniels had an inconsistent freshman year after arriving at USC as the nation's top quarterback recruit, but Helton and new offensive coordinator Graham Harrell believed Daniels would thrive in Harrell's version of the Air Raid offense. Daniels looked mostly sharp before his injury against the Bulldogs, going 25 of 34 for 215 yards and a touchdown, but also throwing a goal-line interception.

"There were really some glimpses of what this offense can be, and it really excited me and our staff," Helton said.

Helton is under pressure to produce an impressive bounce-back season for the Trojans, but that goal has a major new complication with Daniels' injury. Helton and Harrell face plenty of work to prepare Slovis in the next few days ahead of USC's annual early-season Pac-12 opener against the Cardinal.

Slovis unexpectedly won the backup job in camp over Matt Fink and Jack Sears, who entered the transfer portal last week. Both Helton and Harrell have been effusive in their praise of Slovis, an unheralded 18-year-old recruit from Scottsdale, Arizona, who was coached by Pro Football Hall of Famer Kurt Warner in high school.

But Slovis has exactly one half of college football experience, and the Trojans largely ran the ball while he was behind center. That's not the ideal situation for a quarterback facing Stanford's traditionally tough defense, followed by the rest of USC's brutal slate of early-season opponents: BYU, Utah, Washington and Notre Dame.

"We thought he made good decisions," Helton said. "There was just no fear. The moment has never been too big for the kid, and I didn't think it was too big for him last night. He walked out there bright-eyed and said, 'Let's go, Coach.'"

Slovis completed one well-thrown 41-yard pass in the second half against Fresno State, but he also miscommunicated with a receiver and threw a bad interception on another play. He finished 6 of 8 for 57 yards.

"I was just doing what I normally do," Slovis said afterward. "It's the same as practice every day. It's just a live environment, and everyone else is watching this time. I don't think that much changed."

Slovis won the backup job by outplaying Fink and Sears, who started one game last season when Daniels was injured. Sears elected to explore his options away from USC after losing the starting competition, but he has the most experience and possibly the highest upside of the remaining quarterbacks connected to USC.

While Helton didn't mention Sears in his comments to the media Sunday night, neither Sears nor Helton closed the door last week on possibly getting Sears back on the team.

"One of the things that Jack and I always talked about, and I said (was), 'Hey, there is always an open door here,'" Helton said Saturday night. "And he told me, he said, 'Coach, if you ever need me, I'm there for you.'"