Vanderbilt's next chance to end SEC skid comes vs Missouri 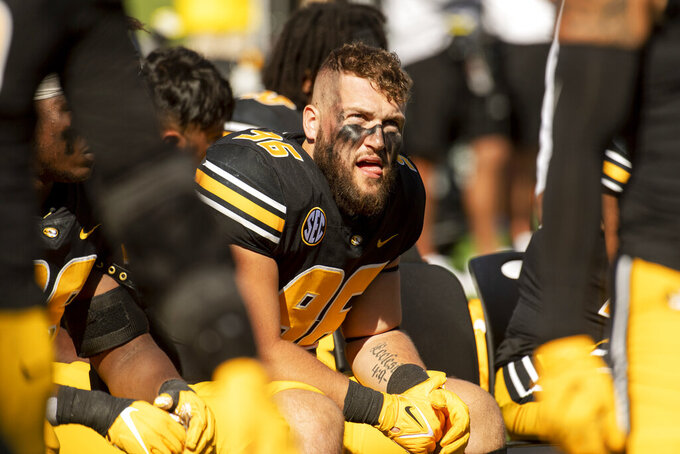 NASHVILLE, Tenn. (AP) — The last Southeastern Conference team Vanderbilt beat is coming to Nashville Saturday and the Commodores are looking to end their 17-game skid against league opponents.

Not that Vanderbilt coach Clark Lea is looking at the Missouri Tigers just an opportunity to end the slide. He's much more focused on his own Commodores (2-6, 0-4 SEC).

“It’s certainly preparing this team for each opponent, and every league game is an opportunity for us to find more about ourselves," Lea said. "And any time we’re short on results, we're frustrated and we’re anxious to celebrate in our locker room after the game. But this year is about establishing a foundation.”

Vanderbilt upset then-No. 22 Missouri 24-14 in 2019. The Commodores made history in their last game against Missouri with soccer goalkeeper Sarah Fuller becoming the first woman to play in a Power Five football game.

But Vanderbilt lost that game 41-0, and coach Derek Mason was fired the next day.

This is Lea's first season at his alma mater, and the Commodores haven't beaten an SEC opponent since Oct. 19, 2019. They host No. 12 Kentucky in their final home game before wrapping the season with road games at No. 10 Ole Miss and Tennessee.

Missouri (3-4, 0-3) hasn't beaten an SEC opponent yet in coach Eli Drinkwitz's second season. His Tigers went 5-5 in his debut season playing a league-only schedule in 2020 during the pandemic. His Tigers had an open date after losing 35-14 to No. 21 Texas A&M, and they come to Vanderbilt having lost three of four.

Drinkwitz described this as a good opportunity and a challenge. He sees Lea as a coach who knows what he wants to create and good defensive and offensive schemes.

“It's just a matter of when it all connects for them,” Drinkwitz said. “We have a tremendous amount of respect for this opponent and what we're going to face. But I don't feel any sense of pressure. I mean you got pressure because you play in this league.”

Lea and his coaches have been busy trying to clean up mistakes, some of which have been brutal. Vanderbilt lost 45-6 last week to Mississippi State but trailed only 10-3 when an interception was overturned on review. then a Vanderbilt player ran into the punter, giving new life to the Bulldogs.

“We’re not able to overcome those things ...," Lea said. “That’s not necessarily unique to us, but where we are right now we have to capitalize on those situations and maximize those. And so it’s frustrating. But in the end, it’s just another opportunity to teach it.”

Missouri running back Tyler Badie leads the SEC and ranks third nationally with 13 total touchdowns. He's second in the league with nine TD runs, and Badie has scored a TD in each game this season. The senior is averaging 143.6 all-purpose yards, which also leads the SEC.

The Tigers haven't lost a fumble yet this and have fumbled only once this season. Penn State is the only other team not to lose a fumble. But sophomore quarterback Connor Bazelak has been intercepted seven times, more than all of last season.

Vanderbilt has 10 interceptions this season, tied for ninth-most nationally. The Commodores also picked off at least two passes in four straight games, something they haven't done since 2011. Safety Dashaun Jerkins is tied for seventh in the country with three interceptions.

The Tigers have been perfect scoring on each of their 21 trips inside the opponent's 20 this season, tied with TCU and Washington in that category. Missouri has scored touchdowns on 81.2% of its trips into the red zone, and the Tigers couldn't be more balanced. They've thrown for nine TDs and run for the other nine.