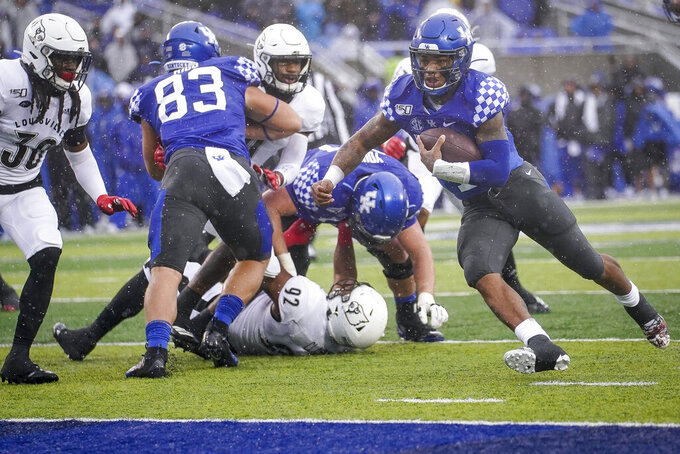 Kentucky quarterback Lynn Bowden Jr. (1) runs for a touchdown during the first half of the NCAA college football game against Louisville, Saturday, Nov. 30, 2019, in Lexington, Ky. (AP Photo/Bryan Woolston) 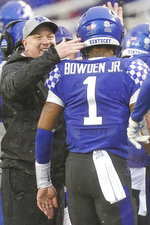 CHARLOTTE, N.C. (AP) — It's rare when a team starts a quarterback in a bowl game with more yards rushing, receiving, and returning than he has passing.

But that's exactly what Kentucky will do when Lynn Bowden Jr. leads the Wildcats against Virginia Tech in the Belk Bowl on Tuesday.

The versatile junior made the transition from wide receiver/returner to quarterback five games into the Wildcats season and the team hasn't looked back since. Kentucky finished 7-5 and earned its fourth straight bowl appearance.

Bowden said he suggested the idea to Wildcats coach Mark Stoops earlier in the year.

“We were just trying something out,” Bowden said. “I just put it in (the coaches') ear. The South Carolina game in the last drive, we went down and scored in five plays."

Stoops said he had some apprehensions at first, but said after thinking it through he felt the move gave his team the best chance to win.

“I don't think you normally see that,” Stoops said. “That was a pretty drastic switch but something that was necessary for us. It speaks a lot for (offensive coach) Eddie Gran and (co-offensive coordinator) Darin Hinshaw and all of our offensive staff for putting those guys in the right places."

“I don't know if he's gotten enough credit on the national level for the transition from receiver to quarterback,” Fuente said. “And he's running the show and if you are half a man out of your gap, he can score. Not just five yards, not just make a first down but he can take it to the house.”

Some other things to know about the Kentucky-Virginia Tech Belk Bowl matchup:

“He was here when Virginia Tech got up and started and he helped start it up with a bunch of other coaches and players. We'll be losing more than just a great coach but a great person off the field and mentor and just a great man.”

The Hokies are playing in their 27th straight bowl game, the longest streak in the country. While they are just 13-19 all-time during that span, they do have a successful history in the Belk Bowl. In 2016, the Hokies rallied from a 24-point deficit to beat Arkansas 35-24 behind a 24-point third quarter. Virginia Tech's bowl streak seemed midway though the season, but Ashby said “we never really thought about the bowl streak. We just knew we could win but we had to get back to being the team that we could be.”

Fuente knows the Wildcats won't be throwing the ball much against them with Bowden at quarterback. But he also knows the Wildcats have nine games this season with at least 400 yards rushing and are difficult to stop, even with being mostly a one-dimensional team.

“Essentially, they lined up and threw the ball two times against Louisville,” Fuente said. “One was a bubble and one was a flea flicker. And they totally dominated the football game.”

The Hokies have their own versatile QB in Hendon Hooker, who threw for 1,445 yards and 11 TDs and ran for 306 yards and five touchdowns this season for the Hokies. He took over as Virginia Tech's QB after the team started 2-2.

Virginia Tech is tied with Texas A&M for the fewest seniors in the FBS with five.