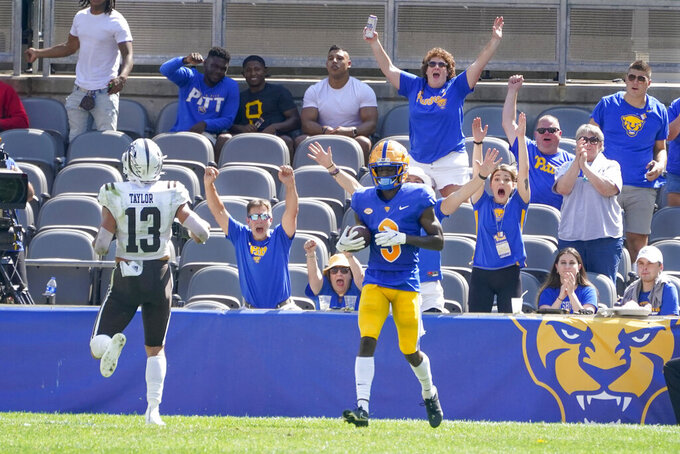 Fans cheer after Pittsburgh wide receiver Jordan Addison (3) made a catch for a touchdown past Western Michigan linebacker Harrison Taylor (13) during the first half of an NCAA college football game, Saturday, Sept. 18, 2021, in Pittsburgh. (AP Photo/Keith Srakocic) 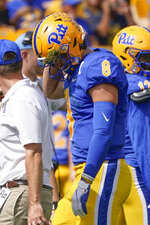 That's not to be confused with “react.” A reaction is emotional. A “response," according to Lester, is calculated. It's measured. It's well-thought-out.

One that reverberated all over Heinz Field on Saturday as the Broncos stunned Pittsburgh 44-41 for the program's victory over a Power Five program during Lester's five-year tenure.

Time and again the Broncos (2-1) would sprint in front only to have the Pitt quarterback Kenny Pickett throw a touchdown pass to shift momentum. And time and again Western Michigan quarterback Kaleb Eleby would snap the ball, make the right decision in Lester's run/pass-option offense and lead a touchdown drive to go back in front.

“We’re going to be in a lot of close games, it's part of the deal,” Lester said. “And this will be a big one. And hopefully, we can continue to respond because it does matter in big games.”

It's the kind of response the Panthers (2-1) delivered a week ago in a stirring win on the road against Tennessee. While they stressed they would take all the steps to avoid a letdown, it happened anyway. Pitt fell behind by 13 early and while they drew even three times, the defense couldn't get the stop necessary to give Pickett a chance to take control of the game for good.

Eleby fought off a bout with cramps that forced him to take an IV at halftime to throw for 336 yards and three touchdowns. La'Darius Jefferson ran for 78 yards and two scores and Western Michigan rolled up 516 yards while holding the ball for 40 minutes, including the last 3:48 after Pickett's sixth touchdown pass drew Pitt within three.

“Running our system and getting the ball at the end with four minutes left and running it out is no better feeling, you know?” Lester said.

Pickett finished 382 yards to move past Hall of Famer Dan Marino into second-place on the school's all-time passing list but Pitt turned it over three times, allowed Pickett to be sacked on fourth-and-6 in the fourth quarter and spent most of the afternoon playing chase against a Mid-American Conference team that lost by 30 at Michigan two weeks ago.

“Felt like we didn’t have any juice or energy today,” Pitt coach Pat Narduzzi said.

Not when it really mattered anyway.

Eleby's 54-yard touchdown pass to Corey Crooms that put Western Michigan up 34-27 in the third quarter was a microcosm of Pitt's afternoon. Panther safety Erick Hallett appeared to have Crooms wrapped up for a modest gain only to have teammate Brandon Hill run into him, allowing Crooms to spin away and race to the end zone.

“Defensively we couldn't get off the field,” Narduzzi said.

Pitt quickly tied it on Pickett's second touchdown pass of the day to tight end Lucas Krull but the Broncos responded, as they did each and every time the Panthers threatened to take control.

Eleby led a 12-play, 75-yard drive that ended with Jefferson bulling over from 3 yards out to make it 41-34. Western Michigan sacked Pickett on fourth-and-6 to snuff out a Pitt response and Parker Sampson's 29-yard field goal gave the Broncos just enough cushion.

Needing a stop after Pickett's final touchdown pass, Pitt didn't get one. Western Michigan churned out a pair of first downs then ran to celebrate with the small group of fans who made the 377-mile trip from Kalamazoo, Michigan while the Panthers trudged to the locker room following another baffling loss.

“It’s not an ACC game,” Narduzzi said. “All our goals are still ahead of us, and it’s one ballgame.”

Lester was the offensive coordinator at Syracuse in 2015 when the Orange fell to Narduzzi and the Panthers 23-20. Lester said he studied the film of that game “300 times” during the course of the week.

While Narduzzi has tinkered a bit with his system over the last six years, Lester felt confident the Broncos would know where the pressure was coming from and Eleby would make the right decision on whether to hand it off or pull it back to look for Crooms (8 catches, 161 yards) or Skyy Moore (11 receptions for 124 yards and a score).

Western Michigan: The Broncos, picked to finish third in the MAC's Western Division, seem to have recovered just fine after getting rolled by Michigan.

Pitt: The schedule was set up for the Panthers to be on a roll heading into ACC play next month. And while Pitt has the firepower to contend in the typically wide-open ACC Coastal Division, given a chance to change the national perception of the program, Pitt collapsed. Again.

Pitt: hosts New Hampshire next weekend in one last tune-up before eight straight ACC games to finish the regular season.