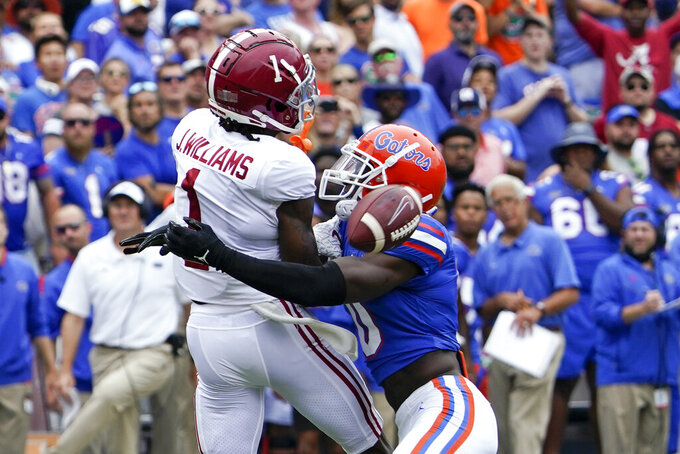 GAINESVILLE, Fla. (AP) — Bryce Young heard all about the Swamp. He knew it would be deafening at times and difficult, if not impossible, for a visiting quarterback to communicate.

He also understood the key to handling such a raucous environment: a fast start.

Young’s first collegiate road trip was a rousing success, a three-touchdown performance that helped top-ranked Alabama beat No. 11 Florida 31-29 in the Southeastern Conference opener for both teams Saturday.

“Crazy atmosphere,” Young said. “Those fans were really loud. We knew it was going to be a hostile environment coming in and they lived up to it for sure.”

The defending national champion Crimson Tide led 21-3 after the first quarter but failed to sustain its momentum and had to stop a botched 2-point conversion with 3:10 left to extend its winning streak to 17. Alabama has now won 32 in a row against teams from the SEC’s Eastern Division.

“I think the offense did a great job of answering the bell in the game,” Alabama coach Nick Saban said. “But our team needs to learn to maintain intensity throughout the game. ... We’ve got a lot of good players. We've just got to get them to play a little better.”

This one was closer than oddsmakers and just about everyone outside of Gainesville expected, with 14 ½-point underdog Florida having a chance to tie the game in the closing minutes despite playing without dynamic backup quarterback Anthony Richardson.

Coach Dan Mullen held Richardson out as a precaution because of a strained right hamstring and said he would only be available in case of an emergency. Mullen said doctors told him Richardson “could definitely make it worse" by playing.

So Mullen went exclusively with starter Emory Jones instead of a two-QB rotation.

“I thought Emory really kind of stepped up his game,” Mullen said.

Jones completed 17 of 27 passes for 181 yards, with an interception. He was booed at times, partly because of the slow start and surely because of the home crowd’s disappointment in not seeing Richardson.

He was at his best late, directing a 99-yard drive in the third quarter and a 75-yarder that nearly knotted the game.

“I still made too many mistakes,” said Jones, who acknowledged a mistake on the 2-point conversion.

But Florida had all the momentum late and was in position to pull off a shocker when Dameon Pierce went around the left end from 17 yards out, making it 31-29 in the waning minutes. But fellow running back Malik Davis was stopped short on the conversion after lining up on the wrong side of Jones.

“One thing a lot of teams do is play Alabama, they sometimes don’t think they’re going to win the game maybe,” Mullen said. “Our guys certainly expected to win the game and played that way. We did last year. We did this year. I think that’s maybe a big part of it.”

Florida came up short again, and many will point to a missed extra point in the third quarter as the difference. Had Chris Howard made that one, the Gators seemingly would have needed another to tie the game down the stretch.

The Gators had one final play deep in their territory and were sacked.

Young completed 22 of 35 passes for 233 yards, showing little issues in a hostile environment. The Swamp packed in 90,887 fans, the fifth most in program history and the most since 2015. The Gators hoped it would affect Young, a redshirt freshman who had never played in that kind of atmosphere.

But he handled it well.

Alabama: Saban’s team looked susceptible after the first quarter, especially on defense. The Tide was gashed between the tackles and picked apart over the middle. There was no consistent pass rush, which has to give everyone in the SEC at least a little hope the rest of the way.

Florida: Mullen has completely changed his team offensively, switching from a passing attack that featured Kyle Trask and Kyle Pitts to a ground game that rotates three running backs and two mobile quarterbacks. The Gators entered the game leading the nation in rushing and finished with 258 yards on the ground.

Alabama hosts Southern Miss next Saturday. The Tide have won 15 of the last 16 in the series.

Florida hosts Tennessee next Saturday night. The Gators have won 15 of the last 16 in the series, which used to be more meaningful in the East.