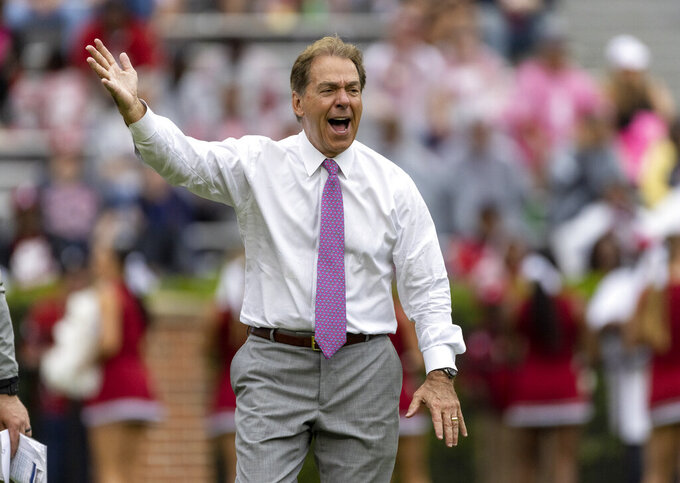 BIRMINGHAM, Ala. (AP) — Alabama coach Nick Saban denies that anybody from his program had contact with receiver Tyler Harrell before the former Louisville player entered the transfer portal, which would have violated NCAA rules.

Saban responded to a suggestion from Louisville coach Scott Satterfield that Alabama had tampered with Harrell, who has since transferred to the Crimson Tide.

“We don’t tamper with anybody, so I don’t know about anything or anybody that tampered with him,” Saban told reporters Wednesday before playing in the Regions Tradition Pro-Am.

Satterfield made the accusation last week in an interview with 247Sports.

“I think it’s not only him, it’s happened before here,” Satterfield said in the interview. “Last year we had a few guys that jumped into the portal and the next day they’re announcing where they’re going. You can look at that and know that something went on before they were in the portal.”

Harrell entered the transfer portal on April 12 and committed to Alabama 10 days later.

Alabama has had 18 scholarship players enter the transfer portal this offseason. Saban said he doesn't have any knowledge of other schools tampering with any of his players but “I just think sometimes when things happen it makes you wonder."

“I think it’s really hard to control third parties, whether it’s direct or indirect,” Saban said. “When you have a guy leave your program to go someplace else the day after a game, I don’t have any evidence that anything happened — and I’m not making any accusations — but it makes you wonder, I guess.

"But hopefully we have enough honesty and integrity out there amongst us professionally in our sport that people are going to abide by the rules.”

Alabama is trying to replace its three top receivers, including All-American Jameson Williams, who was selected 12th overall by the Detroit Lions. Harrell caught 18 passes for 523 yards and six touchdowns last season.