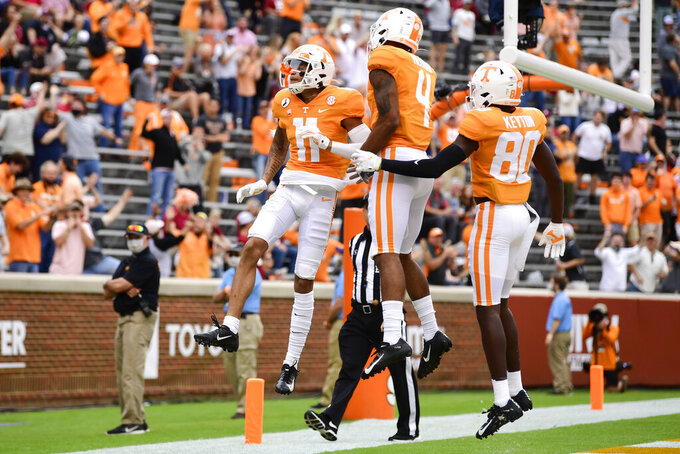 Arkansas' first-year coach recalled how he and Chaney both signed to play football at Central Missouri State out of high school. Chaney was from Holton, Missouri, and Pittman was from Grove, Oklahoma. Pittman never made it to Central Missouri; he signed with Pittsburg State in Kansas, a school much closer to his hometown.

Pittman said he and Chaney later connected on the recruiting trail, and their friendship has lasted through numerous coaching stops. They have coached together on three separate staffs, including Arkansas.

Now, both are with teams that need a boost.

“The three games that we are in the red in turnover margin, we’ve lost,” Tennessee coach Jeremy Pruitt said. “The two games we are in the positive area, we’ve won. It’s kind of that way all across the conference. So, No. 1, we can’t turn the ball over. Period.”

Arkansas is coming off a 42-31 loss at No. 8 Texas A&M. The Razorbacks were carved up by an Aggie offense led by quarterback Kellen Mond, who passed for 292 yards and three touchdowns.

Still, Pruitt said it’s obvious Arkansas is a much improved team over the past few seasons.

“You look at them defensively and you start with (defensive coordinator) Barry Odom," Pruitt said. “I think they have done a fantastic job. They have created different looks in the secondary. They have created a lot of turnovers. I believe they lead the country in interceptions. They have been very opportunistic there.

“Offensively, they have played with a lot of speed, snapping the ball a lot of times. As the season has went, they have been more efficient offensively. They have some explosive plays.”

Pruitt said the open week provided the Vols a chance to take a look at players who have only seen limited playing time in the first five games.

Tennessee linebacker Henry To’o To’o, who leads the team with 33 tackles, echoed his coaches’ words, saying the team needed to focus on the little things.

“We just needed to regroup, figure out our fundamentals” To’o To’o said. “You go through the season, you go through a lot of games and you lose track of your fundamentals and what got you to the point where you’re at. So it was huge for us this week.”

Arkansas redshirt freshman tight end Hudson Henry was a highly sought-after recruit two seasons ago, and the former Pulaski Academy star is starting to show why.

Henry had his best game as a Razorback against Texas A&M with six catches, and Pittman said Henry earned every one of thoem.

“He wasn’t shook,” Pittman said. “He took some shots, handed the ball to the official and got lined back up. He’s doing great, maturing, becoming a weapon. He is perfect for our offense.”

Pittman has tried to emphasize getting off to fast starts and the Razorbacks did that against Texas A&M, taking their opening possession 87 yards in 12 plays, capped by a short touchdown pass from Feleipe Franks to Treylon Burks.

“The first thing we do at practice is really emphasize to start fast. It was one of our team goals,” Pittman said. “It’s like boxing. I don’t know that much about boxing but I’ve been a few fights in my day. You want to throw the first punch to show the guy how tough you are. We talked about throwing the first punch. I don’t know if we did or not, but that was our mentality going into the game.”