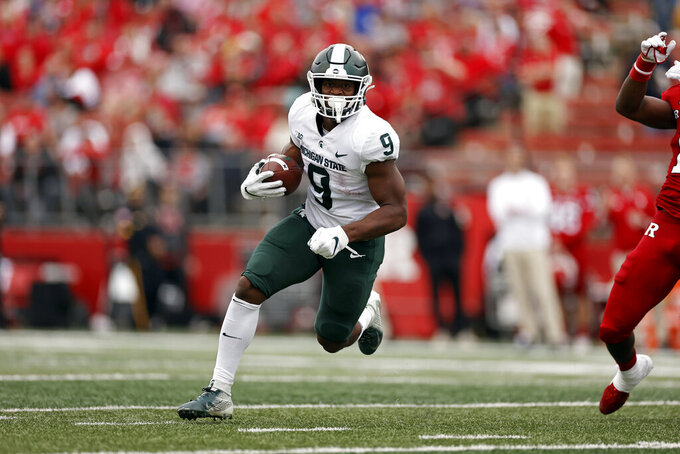 Things to watch during Week 9 of play in the Big Ten Conference:

It's the first time since 1964 that these teams have met when both are in the top 10. Both are 7-0 overall and 4-0 in the Big Ten, and the winner remains at least tied for first in the East Division. The Spartans are going for their 10th win in 14 meetings with their so-called “big brother.” The key for both teams is keeping the ground games under control. Michigan State's tough-running Kenneth Walker III leads the nation in rushing (142.4 ypg) and yards after contact (737), according to Pro Football Focus. Blake Corrum and Hassan Haskins combine for 190 yards per game for Michigan.

No. 9 Iowa vs. Wisconsin

This key West Division game matches two bad offenses against two great defenses. The over-under of 36.5 points, according to FanDuel Sportsbook, is lowest in the FBS this season. Iowa (6-1, 3-1) has been carried by a defense that's generated a nation-best 21 takeaways. The Badgers (4-3, 2-2) have committed a Big Ten-worst 17 turnovers, and only Illinois and Indiana have fewer than Wisconsin's 17 offensive touchdowns.

No. 5 Ohio State (6-1, 4-0) is an 18 1/2-point favorite at the Horseshoe against No. 20 Penn State (5-2, 2-2), according to FanDuel Sportsbook. The Nittany Lions have been awful since Iowa knocked QB Sean Clifford out of that Oct. 9 game in Iowa City. Clifford returned last week and was limited in the nine-overtime home loss to Illinois. No one is playing better than Ohio State right now, and the Buckeyes can put the kibosh on what had been a season of high expectations at Penn State.

Purdue is a 7 1/2-point underdog on the road against Nebraska, according to FanDuel Sportsbook. The Boilermakers were sloppy in their home loss to Wisconsin last week, but the week before their three-quarterback offense flummoxed an elite Iowa defense. If they take care of the ball and get star receiver David Bell going, the Boilermakers can beat the Huskers for the third time in five meetings.

Maryland DB Jakorian Bennett has played only six games but is ninth in the nation and first in the Big Ten with 1.3 pass breakups per game. He stands to be a big problem for Indiana, which is without QB Michael Penix Jr. (shoulder) and might not have backup Jack Tuttle (foot) available. If Tuttle is out, freshman Donaven McCulley or walk-on Grant Gremel would play against the Terrapins.