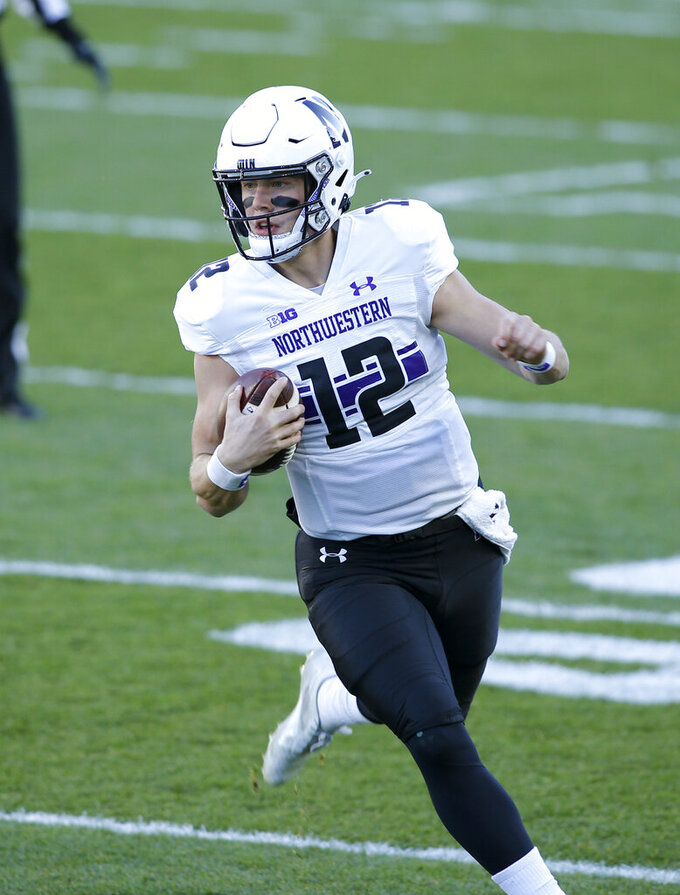 Northwestern quarterback Peyton Ramsey runs on a keeper against Michigan State during the first half of an NCAA college football game, Saturday, Nov. 28, 2020, in East Lansing, Mich. (AP Photo/Al Goldis)

Northwestern is back on top of the Big Ten West after going from winning the division in 2018 to finishing at the bottom last season and will face Ohio State in the conference championship game. The Wildcats secured their second trip to Indianapolis in three years last week because of league rules stating how many games must be played to be eligible. That number was three for Northwestern to clinch the division and Wisconsin to be eliminated from contention. The Wildcats are coming off an unexpected bye after Minnesota canceled because of a COVID-19 outbreak. Illinois scored the first 14 points against Iowa last week, then gave up 35 straight in a 35-21 loss.

Illinois: QB Brandon Peters. The senior has started the past two games after missing three because of a positive COVID-19 test. He led a dominant performance by the offense in a 41-23 win over Nebraska on Nov. 21 and started strong last week. He got replaced by Isaiah Williams in the fourth quarter. And coach Lovie Smith wouldn't say if Peters or Williams will start.

Northwestern: QB Peyton Ramsey. The graduate transfer from Indiana ranks second among active Big Ten quarterbacks with 50 touchdown passes, trailing Ohio State's Justin Fields (56). Ramsey has 66 touchdowns in all, including 16 rushing, since he debuted for the Hoosiers in 2017. He has thrown for 1,136 yards, eight touchdowns and six interceptions this season.

Northwestern has outscored Illinois 161-68 while winning their past five meetings — the Wildcats' best streak in the series. The Wildcats longest win streaks against Big Ten opponents were seven straight over Indiana from 1959-65 and six in a row versus Wisconsin from 1929-37. ... Illinois has started four quarterbacks for the first time since starters' records began being kept in 1975 — Peters, Williams, Matt Robinson and Coran Taylor. ... The Wildcats rank 15th in the nation in total defense (322.5 yards) and sixth in scoring defense (15.3 points).